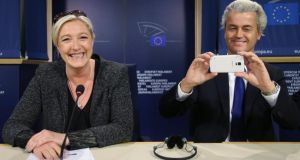 National Front leader Marine Le Pen pledged today to block any moves to increase European federalism in the European Parliament, as the leader made a triumphant return to Brussels following her party’s election victory in France.

Flanked by four other leaders of far-right parties including Dutch Freedom Party president Geert Wilders, the leader of the National Front said she was confident she would gain support of at least seven parties, the threshold needed to form a political group in the European Parliament. “We will be a united front”, Ms Le Pen said, describing her emergent group as a “solid cohesive, political and ideological unit”

She also rejected an alliance with the UK Independence Party, arguing that Mr Farage was reluctant to team up with the National Front because he wanted to remain head of a political group. “I’m sorry, Nigel, we will create our group,” she said.

Ms Le Pen’s rejection of some of the biggest far-right parties means that she faces a challenge in finding a total of seven political parties to form her proposed group.

As protestors gathered outside the European Parliament, Ms Le Pen denounced the media a numberof times during the press conference, accusing the mainstream press of “demonising” her and her party.

Mr Wilders, whose own party came a surprising third-place in the European elections in Holland, congratulated Ms Le Pen on her party’s electoral performance, “I can only be jealous of that” he smiled. The proposed far-right group would be “a group of parties that will fight for sovereignty, for the national state, for national sovereignty,” Mr Wilders said. “We will only become stronger. I am very confident that in the next few weeks we will be able to establish seven parties from seven different countries.”

Matteo Salvini, the leader of Lega Nord, the anti-immigration party which won five seats in the European elections, said the new political group was committed to the idea of “a pluralistic Europe” that respected the differences and sovereignty of each country. Mr Salvini’s party was previously a member of the UKIP-led eurosceptic political group, Europe of Freedom and Democracy (EFD), which also counts the Danish People’s Party as a member. Asked about charges of anti-semitism,Mr Salvini said his party had a very good relationship with Jewish people, and the fight against extreme Islam was something shared by many groups in society.

Ms Le Pen’s visit came a day after EU leaders held their first post-election summit in Brussels on Tuesday night. While the European People’s Party (EPP) candidate Jean-Claude Juncker received the backing of the other main political groupings on Tuesday to become the European Commission president, German Chancellor Angela Merkel’s refusal to fully endorse Mr Juncker at a post-summit press conference in Brussels on Tuesday night has thrown his candidacy into doubt. “I am a member of the EPP. We nominated Jean-Claude Juncker ... The entire agenda can be implemented by him, but also by many others,” the Chancellor said.

A number of countries, in particular Britain, are opposed to the so-called ‘Spitzenkandidat’ system by which the main political groups in the European Parliament nominate a candidate for the position of European Commission head. Hungary, the Netherlands and some of the Nordic countries have also raised questions about the proposed system.