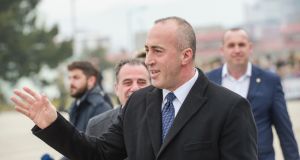 Kosovo prime minister Ramush Haradinaj has warned that any land swap with Serbia “would mean war” and called on world leaders to swiftly quash an idea that he believes only boosts Russian efforts to destabilise the Balkans.

Mr Haradinaj acknowledged that his stance puts him on a collision course with Kosovo president Hashim Thaci, who with his Serbian counterpart Aleksandar Vucic is open to border changes as part of a deal to normalise their countries’ relations.

In recent days senior EU and US officials have said they would not oppose such an agreement as long as it did not cause problems elsewhere in the Balkans, where many people fear that altering frontiers – especially along ethnic lines – would trigger a domino effect of dangerous territorial claims in a region still recovering from the wars of the 1990s.

“It would mean war,” Mr Haradinaj told The Irish Times in Pristina.

Kosovo broke from Belgrade’s rule in a 1998-9 conflict, declared independence in 2008 and its status has been recognised by more than 110 states; Serbia refuses to accept its sovereignty, however, and its stance is backed by Russia.

After years of grinding EU-backed talks on a resolution to the impasse, Mr Thaci and Mr Vucic now suggest that a change to their countries’ borders could help them reach a deal and allow Serbian acceptance of Kosovo’s independence, removing a key obstacle to their hopes of EU accession.

The European Union and United States now seem willing to consider such a plan, despite a multitude of warnings from the Balkans and beyond that it could embolden separatist claims in Bosnia and elsewhere in a region that is still scarred by the bloody collapse of Yugoslavia.

“It would mean opening Pandora’s box, and threatening not only our own stability but the stability of our neighbours,” said Mr Haradinaj, who was a rebel commander during the Kosovo war.

“I think it’s the wrong direction to even allow discussion and rhetoric on borders and territory. I hope world leaders come out as soon as possible and are crystal clear in asking all parties to respect past agreements and stop talking about this.”

Asked whom such a solution would benefit, Mr Haradinaj replied: “Only one man – Putin.”

Russian president Vladimir Putin opposes Nato expansion in the Balkans, and Moscow’s agents are accused of backing a failed coup in Montenegro before it joined the alliance last year.

Russia has also criticised a historic pact between Greece and Macedonia to change the latter’s official name, which would allow it join Nato if votes on the deal succeed this autumn. The Kremlin is also a key ally of Bosnian Serb leader Milorad Dodik, who wants his region to split from ethnically divided Bosnia.

Several Kosovo political parties that oppose Mr Thaci’s plan want to hold a special session of parliament on the issue next week, to vote on a resolution before he travels to Brussels to meet Mr Vucic on September 7th.