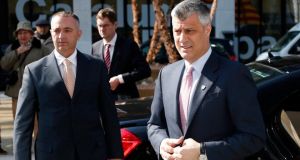 Serbia and Kosovo are racing against time to clinch a deal that would boost their European Union membership ambitions during Ireland's presidency of the bloc, following the failure of the latest round of talks.

The Kosovo and Serb prime ministers were unable to reach agreement during more than 12 hours of negotiations in Brussels on Tuesday. The main sticking point was the status of Serb-dominated northern Kosovo, which rejects the authority of the ethnic-Albanian government in Pristina.

EU foreign policy chief Catherine Ashton said differences between the two sides were “very narrow, but deep” and she gave them a “few days” to bridge that gap before she delivers a progress report on relations between the neighbours in mid-April.

Accession talks
That report will go a long way towards deciding whether EU leaders can use their summit in June to give Serbia an official date for the start of accession talks, and sign a stabilisation and association agreement with Kosovo that would put it on the road towards eventual membership.

The issue of northern Kosovo is particularly thorny.

Belgrade is effectively offering to recognise Pristina’s sovereignty over the whole of Kosovo in return for autonomy for the north where about 50,000 Serbs still live.

But Pristina’s leaders, many of whom fought in a 1998-9 war against Serb forces, have ruled out autonomy, fearing that it would make the north ungovernable and signal de-facto partition of a small state.

Ireland’s Minister for European Affairs Lucinda Creighton said that there was “still a lot of optimism that a deal can be done” by mid-April.