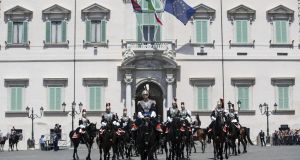 Mounted police officers perform the changing of the guard prior to the swearing-in ceremony for Italy’s new government at Quirinale Presidential Palace in Rome, Italy. Photograph: Massimo Percossi/EPA. 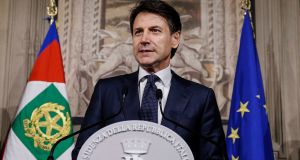 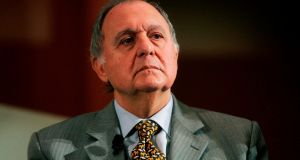 Italian economist Paolo Savona the eurosceptic economist who the populist coalition originally wanted for economy minister but was rejected by the italian president. Photograph: AFP

Italy’s new government was sworn in on Friday, ending the country’s longest postwar political crisis but pushing the euro zone’s third-largest economy into an era of potentially greater conflict with the EU.

Sergio Mattarella, Italy’s president, presided over a ceremony at the Quirinal Palace in Rome that allows Giuseppe Conte, the new prime minister, to take office along with the rest of the 18-member cabinet.

Mr Conte was the compromise candidate chosen by the anti-establishment Five Star Movement and the far-right League after the two parties agreed to strike a deal to govern together after the March general election.

Mr Conte replaces Paolo Gentiloni, the outgoing prime minister, who presided over the final stretch of a five-year period in which centre-left administrations ran the country. On Thursday night Mr Mattarella gave his green light to Mr Conte’s government by approving the ministers picked by Five Star and the League.

“We are ready to launch the government of change and improve the quality of life of all Italians,” Mr Di Maio said.

Giovanni Tria, a professor of political economy, will be finance minister, while Enzo Moavero, a former EU official, will be foreign minister.

Five Star and the League have vowed to reboot the Italian economy through a mix of tax cuts and spending increases that risk increasing the budget deficit, in defiance of EU rules. They have also challenged EU trade deals and sanctions against Russia.

Their ascent to office marks the first time one of the founding members of the EU and euro zone has been led by such an avowedly Eurosceptic government – something that began to unsettle investors in recent days as their coalition came together.

But investors grew even more nervous when it appeared their attempt to govern had failed when Mr Mattarella rejected an initial choice of finance minister. That could have led to an interim government and fresh elections, which could have turned into a de facto referendum on important aspects of Italy’s relationship with the EU.

Italy has had the slowest recent economic growth in the euro zone and its debt burden, around 130 per cent of gross domestic product, has also been a concern to markets.

Italian voters have also grown increasingly angry at what they have seen as a lack of help from other EU member states to shoulder some of the burdens of the migration crisis in Europe over the past three years. Italy, as a Mediterranean country, has been a point of entry for hundreds of thousands of migrants, stretching the state’s resources.

Matteo Renzi, the former prime minister, now a senator for the Democratic party and a frequent target of Five Star and League attacks over the years, said: “We will demonstrate how to do opposition in a civil way.” – Copyright The Financial Times Limited 2018