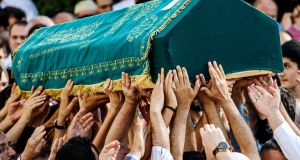 Turkey has blamed the Islamic State terrorist group for the attack at Ataturk airport in Istanbul on Tuesday night that killed 41 people.

The dead, according to local media reports, include a 51-year-old taxi driver, a married couple who worked as ground crew at the airport and a tour bus driver whose wife is six-months pregnant. Four bodies had still to be identified on Wednesday evening.

Thirteen foreign nationals: five from Saudi Arabia, two Iraqis and one each from Tunisia, Uzbekistan, Ukraine, Jordan, Iran and China were killed in the attack.

The blasts occurred just minutes after iftar, the meal with which the day-long Ramadan fast in Islam is broken. More than 239 people were hospitalised after the attack, and 41 remained in intensive care on Wednesday.

At least two of the three assailants detonated their suicide vests in what appeared to be strategic areas of the airport most likely to result in high numbers of casualties. One attacker blew himself up next to the main international arrivals exit close to where people queue for taxis.

A second is thought to have detonated their vest closer to the terminal’s entrance.

Criticism from Turkish opposition political parties was directed squarely at the ruling AK Party. “This government is incapable of bringing peace and serenity into Turkey. The claims for serenity and stability by a mentality which adopts policies of tension, polarisation, conflict and war in both domestic and foreign relations for a power grab are null and void,” a statement from the co-chairs of the Kurdish-focused Peoples’ Democratic Party read.

Turkish authorities imposed a media blackout reporting the airport attack, as it regularly does in the immediate aftermath of sensitive events such as a acts of terrorism.

Two Turkish Airlines flights from Dublin to Istanbul on Wednesday were delayed by at least two hours, but were not cancelled, according to the airline. Passengers with the airline have until July 31st to rebook and reroute flights through either of Istanbul’s two airports without charge.

Aer Lingus, which operates twice-weekly flights to and from Izmir, said it had no plans to change its schedule.

The Department of Foreign Affairs said its travel advice for Irish travellers planning on visiting to Turkey would remain at the “high degree of caution” level.

“There is no indication of any Irish involved [as victims of the airport attack] and no requests for consular assistance have been received. We stand ready to provide assistance if requested,” the department said.

“Ataturk airport is a major international crossroads and this was an attack on the both the people of Turkey and on the whole international community,” said Minister for Foreign Affairs Charlie Flanagan.

“It shows the lengths to which extremists are prepared to go to inflict harm and reinforces the need for international co-operation to track down terrorists and to stop these kinds of attacks.”