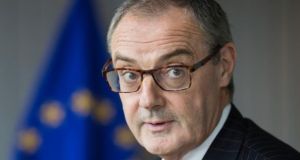 Among the highest priority items in David O’Sullivan’s new job are negotiations aimed to secure a trade agreement between the EU and US.

Irishman David O’Sullivan has formally taken up his new role as European Union ambassador to the United States after presenting his credentials to president Barack Obama at the White House.

Mr O’Sullivan is only the second ambassador to represent the EU as the position only came into force since the Treaty of Lisbon in 2009.

He succeeded Portuguese diplomat Joao Vale de Almeida in the role and follows in the footsteps of former taoiseach John Bruton who was the EU’s representative to the US from 2004 to 2009.

A native of Dublin and graduate of Trinity College Dublin and the College of Europe in Bruges, Mr O’Sullivan spent almost 35 years at the EU where he was secretary general of the European Commission from 2000 to 2005 and head of cabinet of commission president Romano Prodi and director general for education and training. He was director general of trade from 2005 to 2010 and most recently chief operating officer of the European External Action Service.

He began his career in the Irish Department of Foreign Affairs and spent four years at the EU Commission’s delegation in Tokyo.

Mr O’Sullivan announced he had officially taken up his job in Washington with his first message on social media website Twitter.

“Happy to send out my 1st tweet as EU Ambassador to the US after having presented my credentials to @BarackObama @WhiteHouse today,” he wrote in the message.

Among the highest priority items in his new job are the negotiations aimed at securing a trade agreement between the EU and US, known officially as the Transatlantic Trade and Investment Partnership or TTIP, which has been the subject of seven rounds of talks.

Mr O’Sullivan said in his presentation of credentials letter to Mr Obama that “in these testing times the transatlantic relationship remains a solid bedrock.” He described the potential trade deal as a “once in a generation opportunity to strengthen the greatest economic corridor in the world and give a significant boost to global trade.”

He noted the strong cooperation between the EU and US on other pressing issues including Ukraine and the Iran nuclear negotiations.

“Through my professional life I have had the opportunity to contribute to building a unified, prosperous and outward-looking union,” he wrote in the letter to Mr Obama.

“The United States has been a close friend of the EU since its origins as the Coal and Steel Community over six decades ago. Reforms on the EU side have led to more unity and coherence as a global actor and partner for the United States.

“As a beneficiary and coherence of that legacy, I am mindful of my responsibility and will spare no effort to strengthen our unique and indispensable ties.”