Taoiseach predicts talks at Brussels summit will extend into weekend

Taoiseach Enda Kenny has said Ireland will not support debt relief for Greece as crisis talks continue in Brussels and he was also critical of the tax raising measures that the Greek government has proposed to try to reach a deal with its creditors. 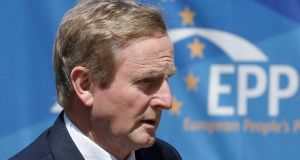 Taoiseach Enda Kenny has said Ireland will not support debt relief for Greece as crisis talks continue in Brussels.

Speaking to reporters on the way into the European Union leaders summit in Brussels, he was critical of the tax-raising measures the Greek government has proposed to try to reach a deal with its creditors.

Mr Kenny said the eurogroup meeting of finance ministers had been adjourned again as there did not seem to be credible papers on the table.

“From our point of view we want to encourage a system to help Greece and the people in Greece but it is very important that the propositions that are tabled make economic sense and that they are financially sustainable and fair,” he said.

Mr Kenny firmly ruled out Irish support for a write-off of Greek debt but an Irish official said the Taoiseach had stated his support for “debt reprofiling” – altering the repayment terms.

Mr Kenny said he had pointed out at a meeting earlier on Thursday of the European People’s Party (EPP) group of leaders that Ireland had emerged from its crisis by pursuing pro-growth policies.

He said that in the later discussion with the other EU leaders he would repeat those changes that Ireland was able to make to underpin the recovery.

“It is difficult to see the beneficial effect of measures that increase the tax on labour that increases income tax and increases PRSI. These are not in the interest of growth. That is what the discussions are about.

“I think there is a frustration among the ministers of finance that they don’t have figures they can work off,” said the Taoiseach.

Asked if Ireland would support debt relief for Greece he answered simply. “No.”

He predicted that it was going to be difficult to conclude on Thursday. “I can see this going into the weekend but clearly we are in the closing hours to making a decision here.”

The ’s finance ministers’ meeting – the fourth in less than a week – has been adjourned briefly to allow Greece to come forward with further proposals.

Mr Tsipras, who is attending the summit of EU leaders, rang the Greek President earlier on Thursday to update him on the negotiations.

Arriving at the summit, German Chancellor Angela Merkel said negotiators had “not yet made the necessary progress” in the talks, adding that “in some places we feel that we are falling back a bit”.

With Britain’s pledge to renegotiate its relationship with the EU and the migration crisis in the Mediterranean also on the agenda of the two-day summit, euro zone leaders may hold a separate summit on the fringes of the meeting, perhaps overnight, in an attempt to secure a breakthrough on the deal, though a further meeting over the weekend is also possible.