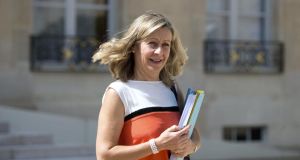 France has always been a country of immigration, but now increasing numbers of young people, usually from the upper middle classes, are going abroad.

The conservative opposition has used the phenomenon to spread the allegation that, in the words of UMP vice-president Thierry Mariani, France is being “drained of its life forces”.

Hélène Conway-Mouret, minister delegate for the French overseas, accused the opposition of fear-mongering: “The line they’re peddling is that since Hollande’s election everyone wants to flee France. It’s simply not true,” she said in an interview.

At the beginning of the month, Le Monde published a front-page headline on “These young French who want to leave”, alongside an editorial on “the forgotten promise of Mr Hollande”. The newspaper of record devoted two pages to youth emigration, including a scathing opinion piece by Mr Mariani.

Mr Mariani quoted a poll by Le Figaro last spring showing 75 per cent of the French worry about mass emigration. Young people are leaving “to escape the legal uncertainty and fiscal pressure that have become the real hallmark of the socialist government”, he wrote. Ms Conway-Mouret fought back in her own opinion piece in yesterday’s Le Monde, titled: “No, the young are not fleeing France!”

In conversation, Ms Conway-Mouret condemned the “negative cliches” used by French media about expatriation. “Gérard Depardieu [who moved to Russia to escape French tax]; fiscal exiles; rich people under coconut palms. They trot out the same old headlines about the ‘brain drain’ to sell newspapers in summer. I’m trying to change the image.”

In a survey by Deloitte consulting last February, 27 per cent of young graduates said they wanted to work outside France, compared to 15 per cent a year earlier.

Change in mentality
Until recently, it was not in the mentality of young French people to want to work abroad. Ms Conway-Mouret sees the change as a positive trend, rooted in “the widening European space” and the transport and communications revolution. Most return after three to five years abroad, she noted.

“Every expatriate builds a bridge between France and the world,” Ms Conway-Mouret wrote in Le Monde. “What a shortcut to believe that the international mobility of our youth marks a break with France. On the contrary, this phenomenon shows the growing integration of our country in globalisation and the changing world we live in.”

French-born Ms Conway-Mouret lived for 25 years in Ireland, where she ran the language department at DIT. She intends to participate in the Irish Government’s global forum, which will bring together influential members of the diaspora, in the autumn.

In June, Ms Conway-Mouret organised an international conference on the theme of diaspora in Paris, attended by Irish Ambassador to France Paul Kavanagh. “He spoke movingly of the pride the Irish take in those who have succeeded marvellously abroad, of the efforts the diaspora make to aid the Irish recovery,” she recalled.

One aspect of the increasing mobility of French youths is that second-generation immigrants from north Africa are returning to their parents’ homeland, or moving to Gulf states, where their dual French and Arab culture is valued.

French graduates are moving in especially large numbers to Asia, where they often enjoy greater responsibility and higher salaries than in France. The average age of the 3,000 French in Kuala Lumpur is 29, Ms Conway-Mouret noted.

She mentioned a young man from Lyon who markets Lyon-made medical equipment in southeast Asia. “These are the kind of youths who leave now. We need to realise that France inside its borders needs to be a little bigger than herself if she wants to remain the world’s fifth economic power.”