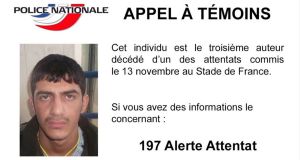 An undated picture released by the French Ministry of the Interior on November 22nd, 2015, shows an unidentified suspect believed to be one of the suicide attackers of the Paris terror attacks at the Stade the France. Authorities are seeking to identify him. Photograph: EPA

Investigators on Sunday extended into a fifth day the detention of a man arrested on Wednesday outside the building where the suspected ringleader of the Paris attacks died, the prosecutor’s office said.

Meanwhile, French police on Sunday released a picture of a man they said was the third suicide bomber at the Stade de France, in a call for witnesses as they try to identify him. Of those three stadium attackers, police have so far identified one man by name.

The fingerprints of the other two show they passed through Greece. One of them was identified as Ahmad al-Mohammad from a Syrian passport found near his body, but it is not clear whether the passport was genuine or stolen.

The man whose detention has been extended, Jawad Bendaoud, told a French television station he had been asked to put two people up in his apartment for three days, but had no idea they had anything to do with terrorism. He was then taken away by police.

Under an anti-terrorism law introduced in 2006, terrorism suspects can be held for up to six days if there is a serious risk of an imminent act of terrorism, or for international co-operation. Then they must be charged or released.

Police have already released the seven other people detained during the assault on the flat last Wednesday in which presumed mastermind Abdelhamid Abaaoud and two other people died.

France has launched a massive investigation to get to the bottom of exactly who was behind the shootings and bombings in Paris last Friday at the national soccer stadium, a famous concert venue and several bars and restaurants.

Investigators believe Abaaoud, a Moroccan-born Belgian who had fought for Islamic State in Syria and was one the group’s most high-profile European recruits, was the mastermind behind the attacks.

One of the suspected assailants, Salah Abdeslam, fled to Belgium the day after the attacks and fears of more deadly assaults prompted the authorities there to put Brussels on maximum alert on Saturday, November 21st.

Belgian prime minister Charles Michel advised the public to be alert rather than panic-stricken, but said the raised security level was due to the “serious and imminent” threat of Paris-style co-ordinated attacks.

Belgium has been at the heart of investigations into the Paris attacks after links emerged to Brussels, and the poor district of Molenbeek in particular. Two of the Paris bombers, Brahim Abdeslam and Bilal Hadfi, had been living in Belgium.

A poll conducted by IFOP for the Le Journal du Dimanche newspaper showed 27 percent of respondents were satisfied with French president Francois Hollande following the Paris attacks, up from a 2015 low of 20 last month.