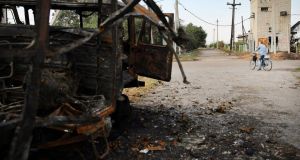 A destroyed military truck in Ilovaisk, a town that has endured weeks of heavy fighting. Photograph: Spencer Platt/Getty Images

The streets of Ilovaisk are lined with rocket-gouged apartment blocks, their shattered windows staring down at the charred carcases of cars, buses and armoured vehicles. The town’s railway station is a bomb-blasted shell, its tracks filled with mangled wagons still linked obediently together.

If Ukraine ever gets to write its own history, and if it teaches its children the truth, generations will shudder at the story of Ilovaisk.

Already, as government forces and Russian-backed rebels continue to die during an official ceasefire, Ilovaisk has become a byword for the brutality of this war, and for the incompetence and alleged treachery that dog Kiev’s bid to win it.

Ukrainian troops seized part of Ilovaisk in early August, when they shrank areas of rebel control in the Donetsk and Luhansk regions and sought to isolate them from the Russian border, across which fighters and heavy armour had flowed freely for months.

While warning of an alarming Russian troop build-up near the frontier, Ukraine celebrated its August 24th Independence Day with a military parade through Kiev and rising hope that it could beat the rebels on the battlefield.

Then something changed, dramatically and disastrously, for Ukraine’s forces.

Officials, soldiers and members of several volunteer battalions say Russia launched an unannounced invasion on or just before Independence Day. If Moscow had earlier masked its intervention in the country, now – apparently to stave off rebel defeat – it launched a full counterattack against Kiev.

“The Russians poured in on the 24th. We saw our forces retreating from the border – they just couldn’t stop the Russians,” said Dmytro Linko (27), a fighter with the Shakhtyorsk unit.

Shakhtyorsk withdrew from Ilovaisk with another volunteer battalion, Azov, to defend a new front opened by Russians and rebels to the south, which threatened the strategic government-held port of Mariupol.

“We had no instructions about what to do against an invasion. We should have prepared for it a month ago, and focused on blocking the border, but there was no forward planning,” Linko said in Mariupol.

“We thought they wanted to take Mariupol,” said Linko’s Shakhtyorsk comrade, Attila Dovzhenko (30). “But maybe it was just a diversion, to take troops away from Ilovaisk. They need it to keep Donetsk connected to the border.”

As Shakhtyorsk and Azov redeployed to Mariupol, other volunteer battalions that had stayed in Ilovaisk were surrounded and being decimated by relentless tank and artillery fire from Russian and rebel forces.

Recovering in hospital from a battle wound, commander of the Donbas battalion Semyon Semyonchenko demanded that army units try to rescue his men, and hundreds of people rallied in Kiev to support such a move.

What reinforcements did arrive were late, disorganised and outgunned by the Russians, and faced the same grim fate as those they sought to save.

On the morning of August 29th, rebel leader Alexander Zakharchenko publicly agreed to an appeal from Russian president Vladimir Putin to allow trapped Ukrainian forces to leave Ilovaisk through a “humanitarian corridor”.

It is not clear whether those who took this supposedly safe exit route were tricked or were fired on because they refused to abandon their weapons. But the result was a massacre of retreating Ukrainians by Russian artillery – more powerful, sustained and accurate than anything unleashed by the insurgents.

Misha Savulchik (29), a Donbas fighter recovering in hospital from shrapnel wounds, said the volunteers were betrayed by Kiev and tricked by Russia.

“They promised every day to send us proper reinforcements and they never came,” he said, seated in a wheelchair around the grounds of Kiev military hospital.

“Then the Russians let our army conscripts leave Ilovaisk, before their tanks closed the circle and killed the volunteers.”

Savulchik had already been evacuated when the massacre occurred. Comrades told him that “many hundreds, at least” were killed, and that the Russians’ intention was clear: to annihilate the volunteer battalions who are Ukraine’s most highly motivated frontline forces. They are the fiercest believers in its revolution and the need to end centuries of Kremlin domination.

“They wanted to kill the ‘ideological’ ones,” said Savulchik.

The army can fire artillery at an adversary from long range, but needs the volunteers – despite their scant training and weaponry – to engage in the close-quarters combat and street fighting that are now beyond the army infantry.

“In Ilovaisk, there were problems with the command of that sector and of the whole anti-terrorist operation,” . To get surrounded in the 21st century is absurd, and it’s not the first time it’s happened,” .

“The volunteers don’t have enough heavy weapons, or proper communications, and there are some problems in relations with the military and officials. We had a revolution but have not created a revolutionary army.”

Causes of the disaster

An official investigation into the disaster of Ilovaisk is now evaluating the roles played by incompetence, accident, inter-agency rivalry and the Russian moles that are thought still to riddle all levels of the Ukrainian armed forces.

The bloodbath left thousands of volunteer fighters feeling like cannon fodder. But it also enhanced their status as heroes for many of their countrymen.