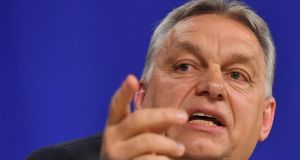 Hungary’s prime minister Victor Orban estures as he addresses a press conference at the end of a European People’s Party meeting at the European Parliament in Brussels on March 20th. Photograph: by Emmanuel Dunand/AFP/Getty

Hungarian prime minister Viktor Orban has hailed his party’s “agreed suspension” from the biggest bloc in the European Parliament as a triumphant compromise, but critics derided it as a craven capitulation to the populist leader.

Members of the centre-right European People’s Party (EPP), which includes Fine Gael, voted overwhelmingly on Wednesday to suspend – but not kick out – Mr Orban’s Fidesz party amid concern over its increasingly radical policies and nationalist rhetoric.

Mr Orban had threatened to leave the EPP if it was suspended or expelled, but he emerged after the vote to declare that Fidesz had in fact decided to pause its membership, pending a report on the party’s behaviour by a panel of three “wise men”.

That odd scenario allows EPP leader Manfred Weber to claim he is being tough on Fidesz; Mr Orban to insist he is not being punished; and the EPP to avoid a split ahead of European elections in May.

“We voluntarily agreed to suspend our participation . . . I sat through the meeting with the departure letter in my right hand. I’d have walked over and handed it over if we’d been excluded.”

Fidesz will not be allowed to attend or play any role in EPP party meetings while the suspension is in place and a three-man panel led by former European Council president Herman Van Rompuy is assessing the situation.

“But now . . . we will campaign for the European People’s Party’s victory,” in the May elections, Mr Orban said, easing fears in the EPP that he would take Fidesz’s predicted 12-14 seats into a new alliance with Polish and Italian nationalists.

Mr Weber, the EPP’s candidate to be the next president of the European Commission, put a different spin on things: “The EPP accepted my proposal to suspend Fidesz. This was a necessary decision. Our values are not negotiable.”

Guy Verhofstadt, head of the liberal Alde group in the European Parliament, lambasted the deal as “a political trick and fudge that shames Europe and is concluded so that Orban can stay. EPP have lost the moral authority to lead Europe.”

“This is a suspension for three months just to wait out the European elections . . . after nine years of breaking down [Hungarian] democracy and the rule of law,” said Dutch Green MEP Judith Sargentini.

Bavarian officials said Mr Orban had accepted their offer of co-operation to allow the liberal, George Soros-funded Central European University (CEU) to keep operating in Budapest, after political pressure prompted it to start relocating to Vienna; the Hungarian government has not revealed details of any such deal, however.