Honeymoon over for Angela Merkel as bickering begins within grand coalition

Berlin Letter: Divisions over pension reforms and Ukraine are testing the CDU-SPD relationship 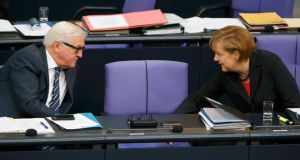 German chancellor Angela Merkel of the CDU chats with foreign minister Frank-Walter Steinmeier of the SPD in the Bundestag on Wednesday. The two have presented a united front on a range of issues, but testing times lie ahead for the coalition partners. Photograph: Fabrizio Bensch/Reuters

After 3,063 days in office, Merkel, leader of the Christian Democratic Union (CDU), has overtaken all chancellors drawn from the rival Social Democratic Party (SPD) – with no sign yet of slowing down.

Snatching second place from Konrad Adenauer, West German founding father and chancellor for 5,143 days, would keep Merkel in office for another six years.

Characteristically, the German leader let the milestone pass with little fuss during this week’s Bundestag debate. Instead, the first sign of tensions in her CDU-SPD grand coalition saw Merkel and SPD leader Sigmar Gabriel use their Bundestag remarks to send warning signals to their own ranks.


Cornerstone of deal
Of primary concern is speculation that one in five CDU deputies are unhappy with pension reform plans, a compromise that is a cornerstone of the coalition agreement. At the behest of the SPD’s left wing, the agreement allows German workers to retire at 63 without financial penalty, once they have worked 45 years with corresponding pension contributions.

The SPD pitched it as a show of solidarity with those who began work as teenage apprentices, particularly in manual professions, and who are penalised if they are physically unable to work until the official retirement age of 67 – an SPD innovation of a decade ago.

The ink was barely dry on the coalition deal when big, expensive posters went up all over Germany celebrating the pension law reform as “not a gift, but hard-earned”.

The PR offensive was premature. Ahead of next month’s Bundestag vote, leading CDU MPs predict the law as it stands will trigger a wave of early retirement as it allows people to go on the dole for their final working years – in effect retiring as early as 60 or 61 at huge cost to the state. Julia Klöckner, a CDU deputy leader and rising star in the party, has threatened to topple the pension deal unless these concerns are addressed.

Annoyed by this 11th-hour haggling, some SPD politicians have begun calling into question CDU’s own pension demands. The mammoth, and controversial, pension package – costing an estimated €20 billion to 2020 – could yet hit the rocks before it can be brought into harbour.

On Wednesday Merkel conceded there was “controversial discussion” over the issue but vowed to address the concerns. SPD left-wingers, meanwhile, have renewed their election promise to increase taxes for additional spending in infrastructure and education.

Amid CDU opposition, Sigmar Gabriel was forced to drop the tax-hike plan in coal- ition talks. Yesterday he told the Bundestag: “Just so we’re clear on my side, there will be no tax increases in this term.”

The grand coalition is also showing the first signs of division over Ukraine. To date Merkel and her SPD foreign minister, Frank-Walter Steinmeier, have presented a united front: condemning Russia’s actions on Crimea, sending warning signals over eastern Ukraine and, all the while, keeping open channels of communication to Moscow.


‘Very problematic’
But now Andreas Schockenhoff, a senior Merkel ally and former Russian affairs co-ordinator, has described as “very problematic” remarks in which Steinmeier criticised the EU for forcing Ukraine to choose between East and West.

“It was Russia and not the EU that forced Ukraine into such a choice,” said Schockenhoff, taking issue with Steinmeier, too, for saying he did not see Ukraine joining Nato any time soon. For now, these remarks are a calculated pitch to appease CDU right-wingers uneasy at the Russian fascination of a section of the SPD. But further tensions with Moscow could yet expose gaps in Berlin’s grand coalition.

Testing times lie ahead, too, on the US National Security Agency affair. The US has snubbed Berlin’s request for information on NSA tapping of Merkel’s mobile, while a Bund- estag inquiry has begun work with a heated row over whether to hear testimony from whistleblower Edward Snowden.

With her 100-day honeymoon behind her, Merkel still has some way to go to top Germany’s leadership leader board. With 5,870 days in office, Helmut Kohl remains the man to beat. If she plans to exceed her mentor’s 16-year term, Merkel has just passed the halfway mark in office.