Group of Irish Travellers accused of chaos at German town 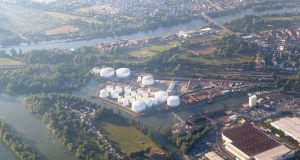 About 600 people in 120 caravans descended on the town of Ginsheim-Gustavsburg (above), southwest of Frankfurt, a week ago, and camped illegally on a site beside the Rhine. File photograph: Wikimedia Commons

A large group of Irish Travellers has been accused of causing chaos on a summer pilgrimage through Germany, leaving rubbish, faeces and overturned chemical toilets at a site and what one local described as a “biting whiff of urine” in the air.

About 600 people in 120 caravans descended on the town of Ginsheim-Gustavsburg, southwest of Frankfurt, a week ago, and camped illegally on a site beside the Rhine.

The Irish arrivals said they were there to celebrate the August 15th Feast of the Assumption, but the town was soon shocked by daylight brawls, blaring music, public urination, shoplifting and high-speed car races.

A 43-year-old Irish man was arrested for making the stiff-armed Hitler salute, which is a crime in Germany.

After several days of chaos, police moved in on Sunday evening and the Irish visitors moved on the next day, leaving behind a field filled with rubbish bags, glass bottles and faeces. It fell to local volunteers to clear up the mess and shoulder much of the cost of returning their river-side meadow to its intended state.

Locals say they are still shellshocked by the experience. “We don’t want them back,” Mayor Thies Puttnins-von Trotha told The Irish Times. “They ignored the bins and chemical toilets we provided. Instead young and old shit in the bushes, you’d see them coming and going with their toilet paper.”

The first caravans showed up a week ago, he said, and by Sunday local police were overwhelmed, forcing him to negotiate with them for a short-term stay. In hindsight, he said, the Travellers proved to be “very manipulative”, negotiating and then reneging on a fee of €100 per caravan.

In the end they paid around €6,000 for their stay, said the mayor, which didn’t cover the cost of cleaning up after them.

Local media had a field day with the Irish visitors, with one young Irish man in a BMW announcing to an evening news camera: “We’re here to have sex with German women and drink a lot of beer.”

The rest of the report showed skidding cars ploughing up fields and young women walking through the town in shorts and high heels, blaring music out of radios.

Locals in Gustavsburg took to Facebook to air their frustration, with many saying they were afraid to leave their homes.

The only ones it seems happy with the visitors were the local pubs which enjoyed a bounce in takings thanks to their Irish customers. Not all Germans are traumatised by their Irish Traveller visitors.

After leaving Gustavsburg, some travelled 30km north to Eppstein and the Taunus camping site.

Owner Jörg Steimer says he has never had any problems with his Traveller guests, who have been visiting on and off for 40 years.

“I don’t understand the fuss from Gustavsburg. I think it was all a bit overblown, perhaps they just didn’t know how to deal with them,” said Mr Steimer.

With their own separate campsite for 30 caravans, he said the Irish guests bothered no one and don’t leave a mess.

If any problems arose, Mr Steimer said he went to the clan leader. For minor problems, he has developed a system of red and yellow cards.

“They laugh when the yellow card comes out, I don’t need many words,” he said. “I can only say positive things about them.”