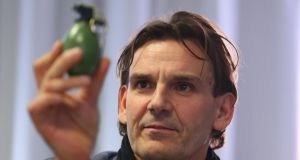 “It’s new that weapons of war are being used”: the recovered M52 hand grenade which had been thrown into a migrant home in Villingen-Schwenningen, Germany. Photograph: Thomas Niedermueller/Getty Images

Migration tensions have escalated further in Germany after a hand grenade was lobbed into an asylum home in a small Black Forest town early Friday morning.

Hours after politicians in Berlin agreed tighter asylum rules, police in Germany’s southwest said it was “simply good luck” that no one was hurt by the grenade. “We are outraged and condemn the attack,” said Robert Kubon, mayor of Villengen-Schwenningen in the state of Baden-Württemberg.

A watchman at the facility in the town, home to 104 people, noticed the grenade being tossed over the fence at about 1.15am. It landed near the watchman container but failed to detonate. It was later found to contain an explosive and was destroyed in a controlled explosion at about 5am, but police are still unsure if the ringless grenade contained a detonator.

Police said they were keeping an open mind in their investigation as to whether the attack’s motive was xenophobia or something else.

While federal police are used to firework attacks on migrant homes, a spokesman said “it’s new that weapons of war are being used”.

A month after the New Year’s Eve attacks in Cologne, where scores of women were physically and sexually assaulted by men, including asylum seekers, Friday’s attack has returned focus to another side of Germany’s migration crisis.

As German asylum applications topped 1.1 million last year, attacks on asylum accommodation jumped five times in the same period to 1,005. The number of attacks on individuals has jumped sixfold to 173, while arson attacks are up 15 times – from six to 92.

New data show the attacks, the vast majority of which remain unsolved, are not confined to Germany’s eastern states, where unemployment is higher and population less diverse. In absolute terms the western state of North Rhine-Westphalia, home to one in five Germans and the largest number of asylum seekers, registered the most attacks: 214 in the first three quarters of 2015. In the western state of Lower Saxony attacks were up 12 times to 89.

Mr de Maizière said the figures showed a worrying trend of violence “creep” in the middle of German society. “I understand concerns and critics, but violence goes too far,” he said.

On Monday night Germany’s ruling grand coalition agreed on a new immigration Bill to come to cabinet next week. It includes a proposal to declare Algeria, Tunisia and Morocco “countries of safe origin”, raising the bar for asylum seekers, and postponing for two years family reunions for asylum seekers from Syria.

After talks in Berlin, chancellor Angela Merkel and Italian prime minister Matteo Renzi agreed greater efforts to tackle human traffickers in Libya. Mr Renzi said he was ready to contribute to a €3 billion refugee fund, but demanded greater flexibility in the European Commission interpretation of how Italy’s budget conforms to EU fiscal rules.