Greek elections: profile of each party in the running

Greece may opt for a safe pair of hands this time, in the New Democracy party 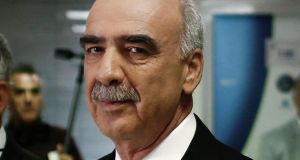 Evangelos Meimarakis, leader of the New Democracy Party of Greece: an accidental leader selling himself as a safe pair of hands. Photograph: Kostas Tsironis/Bloomberg

In contrast to the general election he won eight months ago, a more sombre Alexis Tsipras is now leading into battle a weakened party that has seen about a fifth of its outgoing MPs and legions of its most active members split and form Popular Unity. Tsipras’s campaign speeches boil down to two points: that he clinched a better third bailout deal than the “establishment” parties of New Democracy and Pasok would have and that only he, as an untainted politician, can tackle corruption.

An accidental leader – he became interim party chief of the conservatives following the resignation of former prime minister Antonis Samaras in July – Vangelis Meimarakis’s unpretentious and relaxed style has managed to revive New Democracy’s fortunes by pulling it back towards the centre. Very much part of the party’s old guard, the former defence minister and parliamentary speaker is presenting himself as a safe pair of hands who can bring the country back to stability.

With most of its leadership on trial for membership of, and directing, a criminal organisation that prosecutors say is linked to violent crimes including murder, Golden Dawn is running a less conspicuous campaign than in 2012. The neo-Nazi party is hoping to profit from the anger at what it calls “nation killing” bailouts, vowing to put a halt to “alien invaders”, as it describes refugees.

The centrist party, which won 6 per cent of the vote in January, is unlikely to do much better next Sunday, according to the polls. Now that Syriza has signed up to a bailout and ditched its left faction, Potami-type supporters have fewer quibbles about voting for Tsipras.

For the orthodox Communist Party, the main enemy in this election is the Syriza anti-memorandum splinter Popular Unity, whose overtures for a common electoral front it has angrily rebuffed.

The junior coalition partner in the Syriza-led government, nationalist Independent Greeks is likely to pay the ultimate political price for its backing for the third Greek memorandum by failing to cross the 3 per cent parliamentary threshold.

Once one of the country’s two major parties, centre-left Pasok is likely to just about scrape it back into parliament on Sunday and will, like Potami, be a potential coalition partner for the bigger parties.

Led by Syriza MPs who formerly split with the party last month over the third bailout, Popular Unity has resorted to old Syriza slogans to end austerity and overturn the bailouts. Its election video adverts have taken a tongue-in-cheek approach to many of the attacks on the party, including claims that it would empty the national mint to bring Greece back to the drachma. Yet, the polls suggest it has failed to attract the support it expects.

A staple in all Greek elections going back to 1993, perennial candidate and eccentric Vassilis Leventis is expected to lead his Union of Centrists party into parliament for the first time. A familiar figure on minor TV stations in the 1990s, where he lambasted the corruption of the elite, Leventis’s many YouTube clips have given him a new lease of life among a disillusioned electorate.