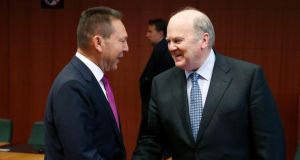 Greece secured a €6.8 billion lifeline from the euro zone today, officials have said, but was told it must keep its promises on cutting public sector jobs and other reforms in order to get all the cash.

The deal, which spares Greece from defaulting on debt that falls due in August, will see Athens being drip fed support under close watch from its international creditors to drive through unpopular reforms.

Under the terms of the deal, euro zone finance ministers agreed to make staggered payments of aid to Greece starting with a €2.5 billion instalment from euro zone countries in July, officials close to the talks said.

The agreement foresees a further payment from euro zone countries of €500 million in October.

Central banks in the Eurosystem will contribute €1.5 billion in July and €500 million in October, the officials said. The International Monetary Fund will give €1.8 billion in August.

“That’s the way it will be done,” said one of the officials.

After more than three years on life support from Europe, Greece’s governing coalition is split over how to meet the demands of its bailout programme, putting the country centre stage and threatening to reignite the euro zone debt crisis.

But a week of talks culminating in promises to reform the public sector appeared to convince international lenders - the IMF, the European Commission and the European Central Bank - that Greece is committed to rebuilding its economy.