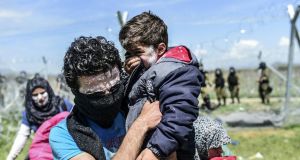 A family with toothpaste smeared over their faces as a protection against tear gas moves to safety as refugees and migrants clash with Macedonian police during a protest near their makeshift camp in the northern Greek border village of Idomeni. Photograph: Bulent Kilic/AFP/Getty Images

Macedonian police said hundreds of migrants camped in fields around the Greek village of Idomeni surged towards the razor wire-clad fence that separates the two states, and tried to force their way through when they were refused entry.

More than 11,000 people are living squalid conditions at Idomeni, apparently still hoping that the border will reopen, despite Greek efforts to persuade them to board buses to better-equipped camps further from the frontier.

It is the largest concentration of some 50,000 migrants who became stuck in Greece when Balkan states to the north closed their borders, and the EU launched a controversial plan to send non-refugees back across the Mediterranean to Turkey.

“A large group of refugees attempted to destroy the razor fence and enter Macedonia. They threw stones, metal things and other objects towards police,” said Macedonian police spokesman Toni Angelovski.

“No single migrant managed to cross on Macedonian side, but [the situation] is still tense,” he said, adding that police had used “tear gas and all allowable means to protect [themselves] and the border”.

Liza Bendevska, a spokeswoman for Macedonian police, said her colleagues were “not using any kind of bullets as they are forbidden by law in Macedonia. We are not using batons as we are on the other side of the fence.”

“We’re treating patients for injuries sustained during beatings and for exposure to tear gas,” MSF said in another tweet, alongside a photograph of a woman the group said was pregnant lying on a stretcher.

Greece condemned Macedonia’s actions, as it continues to come under huge pressure from fellow EU states to deal more efficiently with people stranded on its territory by Europe’s worst refugee crisis since the second World War.

“The indiscriminate use of chemicals, rubber bullets and stun grenades against vulnerable populations, and particularly without reasons for such force, is a dangerous and deplorable act,” said George Kyritsis, a spokesman for Greece’s crisis-response co-ordination committee.

Some reports from Idomeni said migrants had been given leaflets urging them to gather at the border fence, and Greek officials have blamed western activists for triggering previous such incidents.

The clashes came a day after four women and a child drowned off the Greek island of Samos, in the first deaths in the Aegean Sea since the EU started returning migrants from Greece to Turkey last Monday.