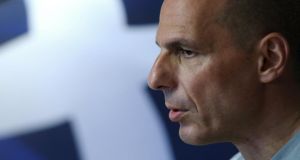 Greek former finance minister Yanis Varoufakis said that Greece was subject to a programme that will “go down in history as the greatest disaster of macroeconomic management ever”. Photograph: Alkis Konstantinidis/Reuters

Economic reforms imposed on Greece by creditors are going to fail, according to the country’s outspoken former finance minister.

Yanis Varoufakis told the BBC on Saturday that Greece was subject to a programme that will “go down in history as the greatest disaster of macroeconomic management ever”.

His warning came as Greece’s prime minister, Alexis Tsipras, reshuffled his cabinet barely 48 hours after dissidents broke ranks over the bailout deal for the country.

International creditors have demanded that the Greek parliament endorse a wave of measures in order to qualify for further financial assistance - including tax hikes that Syriza has argued will only worsen the country’s economic plight.

In a major U-turn, after five months of negotiation, Mr Tsipras agreed to enforce significant pension cuts, VAT increases and an overhaul of collective bargaining rules to secure a third bailout package worth up to €86billion to keep bankruptcy at bay.

Mr Varoufakis, who has warned austerity measures for Greece will strengthen support for the far right, told the broadcaster: “This programme is going to fail whoever undertakes its implementation.”

He insisted Mr Tsipras did not fire him from his role as finance minister. “He didn’t get rid of me,” he said.

“I may disagree with him and I declared that by resigning my post but I understand precisely the very difficult position in which he finds himself.

“We’re completely united in lambasting the highly undemocratic and economically irrational policies of the European Union towards the government.”

Meanwhile, Greek banks are set to reopen Monday after a three-week closure and withdrawal limits have been relaxed, but capital controls remain in place, a government decree said on Saturday.

The decree sets a new cumulative weekly withdrawal limit of €420, with the daily limit remaining at €60.

The bank closure was enacted on June 29th, afterMr Tsipras called a referendum on lenders’ austerity demands that 61 per cent of voters rejected.

The three-week shutdown has cost the country’s struggling economy an estimated €3 not counting lost tourism revenue, according to reports. Guardian service