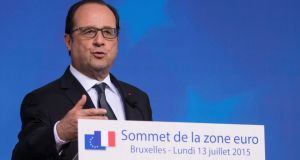 France’s president, François Hollande, is not in the habit of bragging, but he’s likely to be unusually cheerful in his annual televised interview marking the 226th anniversary of the storming of the Bastille today. The socialist parliamentary deputy Olivier Dussopt summarised the situation in a tweet: “Without France and François Hollande, the euro zone would have blown apart.”

Suddenly, the leader who has broken all records for unpopularity appears to be the saviour of Europe. At least half of Hollande’s 45-minute interview today will focus on Greece. Advisers portray him as a “shield” and “protector”. The French are unlikely, however, to forget the poor economic results of his administration.

High points have been few in the Hollande presidency: the military intervention in Mali in 2013; Hollande’s handling of the jihadist attacks in Paris last January; and now, avoidance of a Greek exit.

“François Hollande has risen to the level of history,” prime minister Manuel Valls gushed a few hours after the agreement. Hollande had shown himself to be “a peerless negotiator”, Charlotte Chaffanjon wrote in Le Point magazine, praising his “political skill” and “tenacity”.

Hollande is often mocked as the “man of synthesis” who for 11 years cobbled together agreement within a chaotic socialist party. The moniker became a compliment when he achieved a “synthesis” of German and Greek positions.

Two convictions motivated Hollande in the tense negotiations. If Greece was allowed to leave the euro, he told visitors, the principle of irreversibility would be broken, and it was only a matter of time before more countries left. He also believed that German chancellor Angela Merkel did not want to be the leader who provoked the earthquake of a “Grexit”.

Hollande’s political instinct told him that Merkel secretly longed for a way out of the crisis, and that she did not want a public showdown between Europe’s two leading economic powers. French commentators had speculated that if push came to shove, Hollande would side with Germany against Greece. Yesterday’s agreement saved him from having to make that excruciating decision.

The agreement with Greece was a foreign and domestic policy victory for Hollande. France’s European partners had come to see Paris as weak and recessive. They may show Hollande more respect now. Last week, the German newspaper Die Zeit christened the man nicknamed “Flamby”, after a caramel custard dessert, the new strongman of Europe.

Had Les Républicains had their way, Paris would have followed Berlin. The party nonetheless announced it will vote for the agreement tomorrow in the National Assembly.

The far left has veered into anti-German sentiment in recent days. Jean-Luc Mélenchon, an MEP for the Front de Gauche party, alluded to the world wars, saying that “for the third time, a German government is destroying Europe”.

Prime minister Valls responded: “I hear terrible things about Germany. We must be careful. Germany is a democracy. It is our partner . . . The Franco-Germany couple is indestructible.”

The agreement can be read as a success for both France and Germany. Hollande triumphed on preventing a Greek exit, but Merkel got an accord more rigorous than that rejected in the Greek referendum.