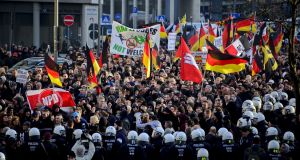 Supporters of Pegida and other right-wing groups gather to protest against the New Year’s Eve sex attacks in Cologne on Saturday. Photograph: Sascha Schuermann/Getty Images

German government politicians have promised to fast-track new laws to crack down on criminal asylum seekers as the number of complaints of physical and sexual attacks filed by women in Cologne on New Year’s Eve has reached 516.

Ten days on, federal justice minister Heiko Maas has suggested the attacks were not the work of an opportunistic mob but a planned attack on women who had come to Cologne to ring in the new year.

“No one can tell me that it wasn’t coordinated and prepared,” he said.

“My suspicion is that this specific date was picked, and a certain number of people expected. This would again add another dimension [to the crimes].”

Women in Cologne on December 31st reported being surrounded by gangs of men, some apparently asylum seekers, who grabbed their hair and breasts and reached under their skirts.

Pegida and other far-right groups have seized on the attacks as proof of the danger posed by mass migration to Germany. But Mr Maas warned in Sunday’s Bild newspaper that it was “reckless . . . to assume from somebody’s origin whether or not they are delinquent”.

Federal interior minister Thomas de Maizière said that, as the Cologne attacks dominate talk “at every kitchen table” in Germany, much work lies ahead to explain why the attacks took place -- and why police failed to intervene.

“Cologne has changed a lot and poses questions such as: do we have lawless zones and can women move freely in this country?” said the interior minister on public television. “Such violence is not new, what is new is the scale of violence with asylum seekers. We need a controversial discussion - debate is good - but what we don’t need is denigration and vulgar language.”

Both were on display in Cologne on Saturday at a heated stand-off between the far-right Pegida group, police and far-left groups around the central train station.

Around 1,700 marchers of the far-right group, hoping to gain a foothold in Cologne after the attacks, threw bottles and fireworks at the same number of police who deployed water cannons and broke up the march after a few hundred metres.

On the other side of the train station, anti-fascist and pro-immigrant groups held their own demonstrations, accusing Pegida of exploiting fear to incite feeling against a majority of peaceful asylum-seekers.

Earlier on Saturday, around 500 women held a flashmob in the shadow of Cologne Cathedral, scene of the New Year’s Eve attacks, holding signs

reading: “We demand respect for everyone woman from everyone.”

Mr de Maizière, as well as Chancellor Angela Merkel and Social Democrat vice-chancellor Sigmar Gabriel, have all promised new measures to make it easier to file charges for sexual assault. Until now a rape charge required proof of violent intent, something that is now under review after Cologne.

In addition, Berlin’s grand coalition wants to expedite the deportation of criminal asylum seekers and push through new measures to improve information sharing on asylum seekers between police and authorities at federal and state level.

The case for greater information sharing among authorities was underlined at the weekend when it emerged that the man shot dead in Paris last week, after attempting to attack police with an axe, was an asylum-seeker last registered in the western city of Recklinghausen.

Mr de Maiziere said the man had been in Germany since 2011. Authorities said he had lived in several cities under at least seven identities – from Moroccan to Georgian – and had served three jail sentences in Germany for drug-dealing and violent attacks.