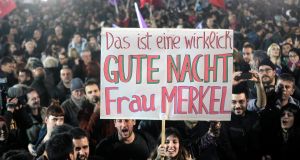 A Poster reading in German, “Good Night Ms. Merkel” is seen during Alexis Tsipras’s speech after the general elections in Athens. The German government has said the election of Syriza to power does not erase Greece’s reform obligations. Photograph: EPA/Orestis Panagioutou

Germany has said Sunday evening’s election victory by the far-left Syriza movement has changed nothing in German and European attitudes towards the Greek reform programme.

Bombarded by questions at a government press conference in Berlin, Chancellor Angela Merkel’s spokesman Steffen Seibert said the German leader had not yet contacted Syriza leader Alexis Tsipras, but would do so if or when he forms a government.

“Greece has made obligations that aren’t erased by election day,” said Mr Seibert. “The position of European and German partners is unchanged from the last years: EU solidarity in exchange for Greek effort and reform readiness.”

Mr Seibert disputed portrayals of the post-election landscape as a looming Athens-Berlin conflict and distanced himself from a remark by a senior Merkel ally in 2011 that, by accepting austerity-driven politics, “Europe now speaks German”.

Such a remark was “more suited to a sexy headline” than to summarise the recent crisis-fighting strategy, said Mr Seibert. Rescue measures to stabilise the euro area, he said, were comprised not of “German” but European measures agreed by EU partners.

“What has to be clarified (now) is not through Greece and Germany at bilateral level but with Greece and its European partners,” said Mr Seibert.

A spokeswoman for the finance ministry said an application to extend loans to Greece would be studied if filed by a new government.

The “Welt” daily was more considered, saying that Greece had ignored warnings and voted for Szipras “whether Brussels or Berlin like it or not”.

“Mr Tsipras, a gifted populist, will have to force uncomfortable truths on many Greeks who still deny reality,” it predicted.