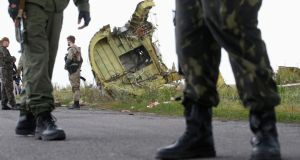 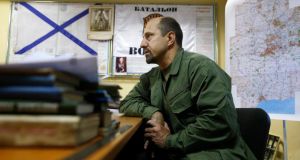 Whereabouts unclear: the rebel commander Alexander Khodakovsky, who said a unit was moving a powerful Buk surface-to-air missile in the area where – and at the time when – the Malaysia Airlines Boeing 777 disintegrated over eastern Ukraine. Photograph: Maxim Zmeyev/Reuters 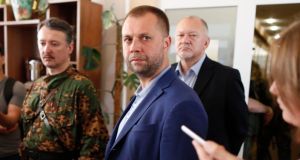 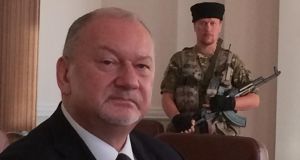 On a sultry night this week in Donetsk, in eastern Ukraine, a car and a minibus pulled off a deserted main road into the empty car park of one of the city’s best hotels.

The van’s doors slid open and men in fatigues carrying Kalashnikovs took up protective positions around the car as its corpulent grey-haired driver heaved himself out and led his tall blonde companion to the hotel restaurant.

As the striking couple dined, their bodyguards waited in the minibus, and were caught by surprise when another group of even more heavily armed men, wearing camouflage and balaclava masks, surrounded their vehicle with guns raised.

Under the muzzles of their assailants’ rifles they were lined up with their hands on the roof of the van; in the restaurant one of their comrades weaved through tables of journalists to whisper to his boss that they had a problem.

Bona fides were eventually established and the gunmen parted peacefully, driving away through the silent streets of a fearful city whose fate is as unclear as the identities and true intentions of the pro-Russian separatists who will decide it.

That night it seemed the standoff could be part of a split in rebel ranks, as a top commander claimed the militants had the kind of missile that Ukraine and its US allies believe shot down flight MH17, killing all 298 people on board.

Alexander Khodakovsky, who leads a battalion called Vostok (or East), contradicted the denials of all other rebel leaders by saying a unit was moving a powerful Buk surface-to-air missile in the area where – and at the time when – the Malaysia Airlines Boeing 777 disintegrated over eastern Ukraine.

He said the region where the aircraft came down, between Donetsk and the Russian border, was “occupied by our, let’s say, partners in the rebel movement, with which our co-operation is somewhat conditional”.

Khodakovsky insisted to the Reuters news agency that he was loyal to the separatist movement, even though he might “think otherwise, say otherwise or have an alternative view” to other commanders. “This causes real discomfort to my soul,” he said. He later denied saying the rebels had a Buk, but Reuters released a recording confirming his quotes; his whereabouts are now unclear, with some local media claiming he is in Ukrainian custody.

Khodakovsky led the “Alpha” anti-terrorism unit, Ukraine’s security services, in Donetsk, until the revolution that ousted Viktor Yanukovich in February. He was in Kiev during protests that left more than 100 demonstrators dead, most by sniper fire, and culminated in Donetsk-born Yanukovich and his allies fleeing to Russia.

People who know Khodakovsky say he cares deeply about Donetsk and is convinced he is defending his home city and region from hostile forces. But they also say he is suspicious of the Russians who have replaced locals as rebel leaders, even as Moscow rejects accusations of co-ordinating the insurgents and sending fighters and advanced weapons to help them.

Khodakovsky was dismissed as the rebels’ security minister this month after being blamed for Vostok’s defeat in two heavy battles, and the separatist defence chief Igor Strelkov relocated his forces to Donetsk.

Strelkov withdrew his men and armour from the town of Slovyansk, about 100km from Donetsk, after a concerted artillery campaign from Ukraine’s forces, and has since sought to tighten his authority over all aspects of rebel security.

“Strelkov” is Igor Girkin, a 43-year-old Muscovite believed to be a former member of Russia’s security services who was present during conflicts in Chechnya, former Yugoslavia and Moldova. He is an avid military historian who likes to take part in battle re-enactments dressed as everything from a Roman legionnaire to a soldier in Russia’s 1918-20 civil war.

A man who in other circumstances could be dismissed as a vain fantasist has acquired a reputation for extreme ruthlessness. Documents found in Girkin’s abandoned headquarters in Slovyansk show he signed an execution order for a man convicted of looting by a rebel military tribunal, on the basis of a Soviet decree on martial law from June 1941. He also approved death sentences for two militia members accused of abducting and imprisoning a local man without Girkin’s permission. Some human-rights investigators also say Girkin is the same Russian officer, known as Strelkov, who was allegedly responsible for kidnapping and torturing civilians in Chechnya.

Girkin has written for the Russian ultranationalist newspaper Zavtra (or Tomorrow), which in the 1990s was edited by Alexander Borodai, a 42-year-old Russian “political consultant” who now calls himself the prime minister of the rebel Donetsk People’s Republic.

Borodai and Girkin came to eastern Ukraine from Crimea, where they helped local Russian nationalist leaders during Moscow’s annexation of the Black Sea peninsula. Before that both men worked for Konstantin Malofeyev, the 40-year-old oligarch who also holds strong nationalist and Russian Orthodox beliefs and who has been named as a major financier of Ukraine’s rebels. This week Kiev accused Malofeyev and the Russian defence minister, Sergei Shoigu, of helping organise and fund the rebels, a claim the businessman denies.

Malofeyev, Girkin and Borodai appear to share dreams of re-creating “Novorossiya”, the historical term for today’s eastern and southern Ukraine, which was part of the tsarist empire and still has close cultural ties to Russia. Vladimir Putin, the Russian president, recently brought the notion back to prominence when claiming Russia had a special interest in this territory and reserved the right to use force to protect its people.

Novorossiya’s historical western edge is Transdniestria, a Russian-backed separatist region of Moldova, which broke from government control in a brief war following the collapse of the Soviet Union. Borodai and Girkin were both there in the 1990s.

As Ukrainian troops bear down on Donetsk, residents feel hostage not only to intensifying artillery fire but also to the expansionist dreams of the formerly obscure Russian nationalists who now lead a self-proclaimed people’s republic in Ukraine.

The latest influential figure to join the rebel ranks is Vladimir Antiufeyev, a shadowy former Soviet security official who fled Latvia after being accused of involvement in a bloody crackdown on its independence movement in 1991.

He admits to working in Abkhazia, South Ossetia and Crimea but declines to give details of his tasks there. He is deeply proud, however, of the 20 years he spent building and running Transdniestria’s separatist security services – something that will send a chill through those who believe Russia wants to lock eastern Ukraine into a “frozen conflict”, making it another post-Soviet limbo shunned by everyone but Moscow.