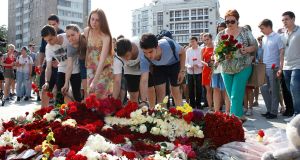 People pay tribute to the victims of the July 14th terrorist attack in Nice at a memorial place in front of the French embassy in Moscow, Russia. Photograph: Sergei Chirikov/EPA

Yet again, the jihadists who have for 18 months harassed, mutilated and murdered in France managed to do the unexpected.

French authorities and the public had feared they would disrupt the Euro 2016 football championship; they waited until four days later, attacking on highly symbolic Bastille Day.

They struck on the Mediterranean seafront, not Paris, with a weapon no one could have imagined; a rental truck, killing 84 people, bringing the toll of the jihadists’ war with France to 232 since January 2015.

Ten of the latest fatalities are children or teenagers, while an Irish man is believed to be critical.

With 50 people reported to be between life and death, the toll is certain to rise.

The perpetrator was named as Mohamed Lahouaiej-Bouhlel, a 31-year- old Tunisian-born delivery driver who was living in Nice. He had a criminal record but had not been known to hold radical views.

Doctors had prepared for Kalashnikov bullet wounds. Instead, they are setting fractured bones and trying to salvage pulverised organs.

In “psychological cells” around the city, traumatised survivors recounted how the truck driver zig-zagged to mow down the maximum number of people as they fled.

“What you see on television is nothing compared to the reality of what happened,” Nathalie Pinheiro Aves told me.

The tall, slender 30-year-old boutique manager moved like a vision down the Promenade des Anglais, impeccably coiffed and dressed after a sleepless night when images of crushed bodies went round and round in her mind. She had tears in her eyes and held a bouquet.

“I want to lay the flowers above [the place] where I saw people dying,” Pinheiro Aves said. A Parisian of Portuguese origin, four days earlier she had celebrated her country’s victory in the Euros.

“The truck was coming at us,” Pinheiro Aves continued.

“A male friend grabbed my arm and threw me against the railing. He saved my life. I saw people being run over. There were children on the ground. I saw 30 or 40 people crushed.”

At first glance, yesterday was a perfect summer’s day on the Promenade des Anglais.

The Mediterranean was turquoise blue, as it was on the Tunisian beach at Sousse when another jihadist, also acting alone, shot 39 tourists dead in June 2015.

Pensioners with sun-leathered skin and tourists in shorts and flip-flops strolled the wide seafront boulevard. No one smiled.

A grey-haired English woman teared up when I spoke to her. Several carried flowers to lay at the police line, a gesture repeated after each atrocity.

The policemen wore bullet-proof vests in the sweltering heat. One told me he was there “to prevent people swimming near the dead bodies; to make sure no one takes pictures”.

The bodies were hidden by tarpaulins tied to metal frames. They must remain in situ, in the hot sun, until judiciary police finish gathering evidence and identifying them.

There’s a poisonous repetition about these attacks. On Thursday night, hundreds, perhaps thousands, of terrified people sought shelter in cafes and bars, pulling down metal shutters and turning out lights, as they did in Paris last November.

Some 200 waited at Ma Nolan’s pub, the centre of Irish life in Nice. “It was like Noah’s ark,” said Christophe Souques, co-director of the pub.

“There were all nationalities, all ages, even babies in prams.”

Souques set himself the goal of calming down his charges. “I told them we were safe, that we had music, food and drink. People started to relax,” he said.

Souques’s husband Sébastien works at at the Bar des Muguets. The men phoned each other during the brief police-enforced siege.

By the time they co-ordinated their exit, there was a policeman stationed every 10 metres, placing red laser targets on their chests.

“My husband is emotional, and he started crying,” Souques recounted.

“A cop understood what was happening and lowered his weapon. When we got out of the danger zone, we got off our scooters and embraced.”

Thibault Malacarne (20) begged police to let him return to Ruhl Plage, which his family owns, and where he witnessed a stampede on Thursday night.

“People had been sitting on our mattresses to watch the fireworks. By the time it was over, there were nearly 300 people hiding in our kitchen. A Lebanese woman gave birth in our kitchen. A fireman delivered the baby.”

A mile-long stretch of the promenade has been cordoned off at least through the weekend.

I had to travel through the backstreets of Nice to reach the far end of the boulevard, where the truck driver’s mad journey had started. There was very little traffic; Nice was deserted.

Some 200 people had reported to the psychological support unit in a grand building facing the seafront.

These units were created after the Charlie Hebdo attacks, in anticipation of future atrocities, Charles Delord, a psychologist, told me.

Delord had listened to men, women and children, in the hope of warding off post-traumatic stress disorder.

“They suffer the same symptoms as a soldier who’s seen scenes of war,” he said. “Except the shock is all the more fierce, for having happened in a joyous, festive setting.”