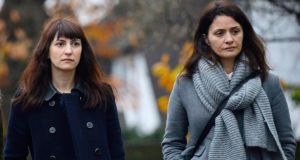 A personal assistant accused of defrauding Nigella Lawson and Charles Saatchi has told a court that she saw evidence of regular drug use by the celebrity cook.

Elisabetta Grillo, 41, said she found various signs that Ms Lawson was using cocaine, including a packet of white powder found in a toilet in the home she shared with former husband, John Diamond, as well as rolled-up banknotes and credit cards with white powder on them.

Asked if she had ever seen the TV cook taking drugs, Ms Grillo — who is also known as Lisa — said “No”.

But she told Isleworth Crown Court in west London that she was aware that Ms Lawson had taken drugs and, when pressed by barrister Anthony Metzer QC about what type of substances, she said both cocaine and cannabis.

Giving evidence on Thursday Ms Grillo, who worked for Ms Lawson as an au pair, said she did not confront her about the issue as she did not want to embarrass her.

She said she thought Ms Lawson knew that she knew about her drug-taking, but added: “I did not want to embarrass myself and her.”

Italian-born Ms Grillo, who is accused alongside her sister Francesca of defrauding Ms Lawson and Mr Saatchi, said that when she was living with Ms Lawson in Shepherd’s Bush around a year after she first started working for her and then-husband Mr Diamond, she found a small packet of white powder in the toilet while cleaning.

She told the court: “I was cleaning the house and I noticed a little packet on top of the loo, toilet.

“I opened it because it was kind of a little funny envelope and I saw white powder.”

On other occasions she said she found rolled-up notes — on one occasion a #20 note — with white powder on them.

“ Once I noticed a credit card with white, and a CD, like a music CD, with white stuff,” she said.

Ms Grillo also told the court she found similar evidence when Ms Lawson moved in with Mr Saatchi at his home in Eaton Square.

She said that in a drawer in Ms Lawson’s office she found rolled-up banknotes, including American dollars.

Asked by Mr Metzer if there was anything on them, she said: “ Yes, again, white stuff.”

The defence barrister asked her how often over the years she had seen signs of drug use, to which she replied: “Regularly.”

Ms Grillo also referred to a box, shaped like a book, in which Ms Lawson has denied stashing drugs.

The celebrity cook last week admitted taking cocaine with Mr Diamond when he found out he had terminal cancer, and on another occasion in July 2010 during her troubled marriage to Mr Saatchi.

But Ms Lawson, who also admitted smoking cannabis in the last year of her marriage to the art gallery owner, said the idea that she was a drug addict or habitual user of cocaine was “absolutely ridiculous” and accused her ex-husband of “peddling” stories about her alleged habit.

Mr Metzer asked Ms Grillo if Ms Lawson’s assertion that she took cocaine with Mr Diamond but never again until 2010 was true.

“No”, she replied. “Because I know I saw more stuff before that.”

Asked how often she saw evidence of cocaine use, she said: “Like, every three days, something like that. Regularly, not only once, for sure.”

She told the court that Ms Lawson’s moods were “very up and down” and said she could be “mean”.

“Sometimes she can be very open with me, say she loved me and sign a message with a kiss. But sometimes it would be mean.

“Once I was having lunch with the girls and I think it’s mean but I don’t know.

“Over lunch she said ‘Can you come here?’ and I thought maybe she needed help cooking.”

But she said that, instead, Ms Lawson pointed to some parsley on the floor, saying: “Can you pick it up?”, and told the court: “I always think that that was kind of mean.”

The former PA said: “She said she felt like being kept in a gold cage.

“She couldn’t go out like normal people for a birthday because Charles wanted her there.”

Mr Metzer asked her if she used to clean the area around the couple’s bed.

“And did Ms Lawson have drawers full of any items?” the barrister asked.

She told the court that Ms Lawson smoked cannabis late at night when she could not sleep.

The former assistant told the court that she had met Ms Lawson and Mr Saatchi’s celebrity friends, including Woody Allen and John McEnroe, at dinner parties at their Chelsea home.

She said Mr Saatchi would lose his temper with her and shout at her because her English was not that good, making her feel “very little”.

“I was scared what to say,” she said.

Ms Grillo was again asked about her use of account taxis by her defence barrister.

“When you used a taxi, did you have to ask permission each time?”

“Why was that?” asked Mr Metzer.

“It was like, if I worked late I would get a taxi. I used it a lot more for work.

“And when I stayed late and when Nigella was upstairs I wouldn’t disturb them. They knew I could call myself.”

Ms Grillo then described how she felt after she was accused of stealing from the celebrity couple.

Ms Grillo told the court she was shocked to be confronted by finance director Rahul Gajjar in July 2012 over her use of taxis or the company credit card.

She said it was upsetting to be accused of doing something wrong when she was convinced she had been allowed to do both.

The court heard that the Grillo sisters later met with Mr Gajjar who urged them to sign a letter admitting fraud and agreeing to pay money back. But they refused and Elisabetta Grillo told the jury they would not sign as she did not want to admit to something she had not done.

She said she was upset by the allegations and wanted to talk to Ms Lawson and Mr Saatchi about them, but they would not speak to her.

She said she tried to contact Ms Lawson via letter and phone call but did not receive a reply.

Asked when she last spoke to her former boss, she said in June last year Ms Lawson invited her to filming for her TV show Nigellissima because she want to include her recipe for Calabrian lasagne.

“I made it for the children many times and she decided to put it in the book,” she said. “She asked me to go to filming with her on the 28th.”

Ms Grillo did go to the filming and the recipe was included in the book. But the next month she was confronted by Mr Gajjar on August 2nd. Grillo was arrested in what she described as a “nightmare”.

She was asked about an email written to Ms Lawson and Mr Saatchi by her and her sister in October last year in which they begged for forgiveness. Asked by Mr Metzer what she was asking forgiveness for, she said: “Because I disappointed them. It’s not because I did something bad... I wanted someone to talk with me, neither Charles or Nigella talked to us, they sent the lawyers and the police.”

The case was adjourned until Friday morning. (PA)