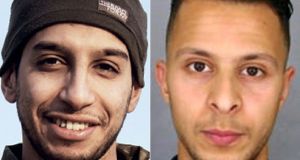 Abdelhamid Abaaoud and Abdeslam Salah: Each time a jihadist arrived in a safe house, the refrigerator was full and a tablet with an internet connection waited for him. Photographs: AFP / Dabiq and Police Nationale/AFP/Getty Images

The November 13th, 2015, massacre that killed 130 people in the Bataclan music hall, in the 10th and 11th districts of Paris, and at the Stade de France, was better organised, more complex and potentially more lethal than realised earlier, an investigation by Le Monde newspaper has concluded.

A computer found in a bin in Schaerbeek, Brussels, following the March 22nd attacks on the Brussels airport and metro included a file titled “November 13”, subdivided into “Omar”, “French”, “Iraqi”, “Schiphol” (the Amsterdam airport), and “metro” sections.

“Omar” referred to the nom de guerre of Abdelhamid Abaaoud, who led attacks on cafes and bars; “French” to the three French gunmen at the Bataclan; and “Iraqi” to two suicide bombers at the Stade de France.

Four men arrested in Salzburg last December were prevented from participating in the Paris attacks because their false identity papers had been detected in Greece.

Another two suspects, Sofien A, a Tunisian, and Ossama K, a Swede of Syrian origin, were arrested in March and April in Belgium. They had boarded a Eurolines bus from Brussels to Amsterdam on November 13th. It is not clear why they did not stage an attack.

Someone in Hungary, identity unknown, sent money to Salah Abdeslam, the only survivor of the November 13th attacks, now in prison in France.

Accomplices of the network rented apartments under false names, did grocery shopping or driving.

Each time a jihadist arrived in a safe house, the refrigerator was full and a tablet with an internet connection waited for him. Abdeslam stayed in at least three such safe houses before he was arrested on March 18th.

Unidentified DNA has been found in several of some 10 safe houses set up by the Franco-Belgian network. The fact that accomplices are still at large is all the more worrying because members who survived November 13th rallied to commit the March 22nd atrocities in Brussels.

Nor have investigators established the identity of “Abu Ahmed”, the Islamic State operative in Syria to whom Najim Laachraoui, a suicide bomber at Zaventem airport, promised to send his testament. The Franco-Belgian group sought Abu Ahmed’s approval for a kidnapping plot, and he sent orders and money to the Salzburg and Stade de France jihadists.

Lahouaiej Bouhlel sent what Le Monde called “a Judas kiss, unprecedented in the history of anti-terrorism” in the form of a text message, just a few minutes before he started down the Promenade des Anglais in a 19-tonne lorry.

The killer named three “friends,” all Tunisian or Franco-Tunisian, and gave the exact address of the Albanian couple who sold him a gun. All were arrested following the attack.

A businessman who had employed Lahouaiej Bouhlel in 2010-2011 told investigators he “had a strange look in his eyes, as if he was disconnecting. When he was angry, he stared fixedly, with a very dark look . . . If someone said something he didn’t like, or if things weren’t going his way, he seemed to tip psychologically”.

Islamic State claimed credit for the Nice massacre, calling Lahouaiej Bouhlel “a soldier of the caliphate”. But French authorities believe the claim was “opportunistic”, having found no trace of contacts between the lorry driver, or his suspected accomplices, and jihadist groups.

The Nice massacre prompted the first media appearance of Rachid Kassim (29), from Roanne in the Loire Valley, and now the number one target of French intelligence.

Before leaving for Syria, Kassim’s job was to accompany children from a social centre to their canteen.

Kassim is believed to have inspired the stabbing murders of a police officer and his partner, a police secretary, in front of the couple’s three-year old child in June.

He was in direct contact with two young Frenchmen who slashed the throat of Fr Jacques Hamel in Normandy, and with three young women who tried to blow up a car filled with gas canisters near Notre Dame cathedral. About a dozen young people, including minors, have been detained because they communicated with Kassim via the encrypted message service Telegram.

At least 37 minors – including 12 girls – are formally under investigation in connection with terrorist offences in France.