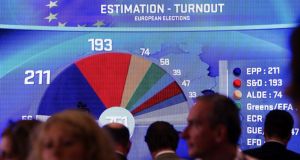 A projection shows an estimation of seats in the European parliament on giant screen at EU parliament during elections evening in Brussels this evening. Photograph: EPA

After four days of voting by an electorate with more than 330 million eligible voters in 28 countries, efforts by the European Union to rally sagging public support and give new momentum to a stalled six-decade push for unity appeared to stumble Sunday amid signs that voter turnout in parts of Europe had hit record lows.

Official results and turnout figures in the election for the European Parliament will not be available until tonight but preliminary reports from several countries, including the Czech Republic, Slovakia and Malta, suggested voter interest has slumped.

In France the nationalist extreme right has turned European politics upside down on by trouncing the governing Socialists and the mainstream conservatives in the European parliamentary elections which across the continent returned an unprecedented number of MEPs hostile to, or sceptical about, the European Union in a huge vote of no confidence in Europe’s political elite.

According to exit polls, the Front National of Marine Le Pen came first in France with more than 25 per cent of the vote.

The nationalist anti-immigrant Danish People’s party won by a similar margin in Denmark. In Austria, the far right Freedom Party took one fifth of the vote, according to projections, while on the hard left, Alexis Tsipras led Greece’s Syriza movement to a watershed victory over the country’s two governing and traditional ruling parties, New Democracy conservatives and the Pasok social democrats.

In Austria, the far right Freedom Party took one fifth of the vote, according to projections, while on the hard left, Alexis Tsipras led Greece’s Syriza movement to a watershed victory over the country’s two governing and traditional ruling parties, New Democracy conservatives and the Pasok social democrats.

The voting across four days in 28 countries, according to exit polls tonight, delivered a string of sensational outcomes, with radical and nationalist anti-EU forces scoring major victories both on the far right and the hard left.

In Britain, the Nigel Farage-led insurrection against Westminster was also tipped to unsettle the poltical mainstream by coming first or second in the election.

The Tories, the biggest UK caucus in the parliament for 20 years, faced the prospect of being pushed into third place.

In Germany, the most powerful EU state, Chancellor Angela Merkel’s Christian Democrats scored an expected easy victory, but Germany also returned its first eurosceptics in the form of the Alternative for Germany as well as its first neo-Nazi MEP from the Hitler apologists of the National Democratic Party of Germany, according to German TV projections.

And Ms Merkel’s Christian Democrats dropped several points while the SPD (social democrats) made significant gains, narrowing the gap between the two big parties to around 8 percentage points. The election mattered more than ever before because the Strasbourg-based parliament has gained greater powers, meaning it will have a strong say in most EU legislation over the next five years and will also shape the outcome of the battle for the most powerful post in Brussels, the new head of the EU executive or European commission.

However, its mandate to exercise those powers was dented by the low turnout, at around 45 per cent, raising renewed questions about the parliament’s legitimacy. If the Front National score is confirmed, it will be the first time that the anti-immigrant, anti-EU party has won a national election and would give the party 23-25 of France’s 74 seats in the European Parliament.

Ms Le Pen immediately called for the dissolution of the French national assembly after the exit polls showed her anti-immigrant, Eurosceptic party winning .

“What else can the president do after such a rejection?” Ms Le Pen told reporters at Front National headquarters when asked if Hollande should dissolve the national parliament.

“It is unacceptable that the assembly should be so unrepresentative of the French people.”

From the beginning of the European election campaign Le Pen was insistent that Sunday evening would finally see the Front National emerge as “France’s No 1 party”. Election pundits scorned her pretentions; the opinion polls confirmed them.

With up to 10 per cent of the vote Golden Dawn looks set to elect at least two out of Greece’s 21 euro deputies, despite an ongoing criminal investigation and the fact that several of its leading members are in pre-trial detention.

Syriza was ahead by about 3 percentage points over the leading government party, the conservative New Democracy, polls jointly carried out by six leading opinion companies showed. Syriza’s parliamentary spokesman Panagiotis Lafazanis said that if confirmed, the EU vote constituted a game-changer in Greece.

“The (EU vote) result alters Greece’s political scene,” Mr Lafazanis said. Victory for Syriza would appear to reflect popular frustration with the harsh spending cuts the government has adopted in recent years to meet the terms of its economic rescue programme.

The Czech Press Agency, citing election officials, said the turnout was likely to be less than 20 per cent, down from just over 28 per cent at the last European Parliament election in 2009.

Malta reported a much higher turnout of nearly 75 per cent, but even that was 4 per cent lower than the vote in 2009.