Europe Letter: Britain’s election is key to future within EU 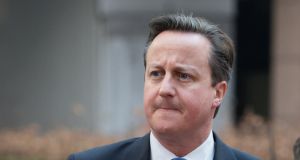 British prime minister David Cameron arriving for an EU leaders’ summit in Brussels. He has committed to holding a referendum on EU membership by 2017

British prime minister David Cameron kicked off the British general election campaign this week, describing it as “the most important general election for a generation”. The election on May 7th will also have crucial ramifications for Britain’s relationship with the European Union.

While domestic political issues such as the economy and the National Health Service are likely to dominate the election campaign over the next six weeks, beneath the day-to-day campaigning lie deeper questions about Britain’s place in the wider world and the EU.

Cameron has committed to holding a referendum on EU membership by 2017 – a date that coincides, ironically, with Britain’s presidency of the Council of the European Union during the first half of 2017.

A referendum is almost certain should the Conservatives win a majority on May 7th. If not, the party would need the support of any coalition partners. The Tories’ current coalition partners, the traditionally pro-EU Liberal Democrats, have indicated they could be prepared to back an EU membership referendum in return for other concessions.

As the Conservatives try to keep the tricky Europe question off the agenda and focus on their economic record in government, Labour has gone on the offensive on Europe.

Leader Ed Miliband opened his campaign on Monday with a pledge to keep Britain in the EU, warning that the Tory policy on Europe presented “a clear and present danger” to jobs and businesses.

Officials in Brussels are watching developments in Westminster quietly from afar. With the configuration of the next British government unclear, the European Commission is under no pressure to formulate a position on the British question.

After the election, the question of a British renegotiation of EU membership is likely to become more pressing. Both European Council president Donald Tusk and European Commission chief Jean-Claude Juncker are understood to be open to working constructively with Britain, despite Cameron’s campaign against Juncker’s candidature for the EU’s top job last year. But the core issue remains how far Britain can secure changes within existing EU treaties.

Cameron’s pledge to hold a referendum two years ago was predicated in part by a belief that the EU treaties would be reopened anyway in the coming years to facilitate greater euro-zone integration, offering Britain the opportunity to demand its own changes. Now, the prospect of treaty change looks remote.

Britain has genuine allies in terms of some of the reforms it wants – such as a tightening up of immigration and benefit rules. Some of the changes it has been advocating, such as a reduction in EU bureaucracy, are already in train under the more streamlined commission headed by Juncker.

With treaty change now unlikely, the best British negotiators are likely to achieve are reforms that are possible within existing EU legislation. A key issue over the coming years will be whether these changes can be presented to the public as a significant “renegotiation” of EU membership terms, or merely the securing of the kind of changes that member states already get as part of the cut and thrust of Brussels negotiations.

It is also unclear how the Tories intend to convince a sceptical public about the merits of staying within a “reformed” EU, given the relentless Euroscepticism that has been promoted in much of the British press.

For Ireland, the costs of a British exit would be enormous, affecting everything from the fragile peace agreement in Northern Ireland to the huge trade in goods and services between the two islands, as illustrated by the recent book by Dáithí O’Ceallaigh and Paul Gillespie, Britain and Europe: the Endgame – an Irish Perspective.

Ireland would also lose a key ally around the EU negotiating table.

Within the chorus of national positions that make up the 28-member EU, Britain and Ireland are aligned on a number of key issues, particularly in the area of the single market and commerce. This includes common positions on everything from the EU-US trade deal to new EU data protection rules and financial services regulation.

The establishment of a special unit within the Department of the Taoiseach to deal with a possible British exit shows the Government is taking the threat of “Brexit” seriously.

Nonetheless, Ireland faces a delicate balancing act over the coming years in Brussels – demonstrating to its European partners that it remains committed to the European project, while working constructively with Britain on a reform agenda in which both countries share much common ground.