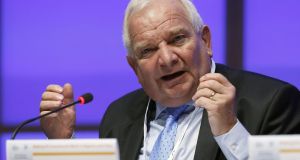 The rise of populism and extremism across Europe is “undermining the European project”, European People’s Party (EPP) president Joseph Daul said yesterday as members of the centre-right political party gathered for a two- day congress in Madrid.

Mr Daul, who was expected to be re-elected as party president last night, said comments from far-right leaders such as France’s Marine Le Pen echoed the extremism seen in Europe during the second World War.

“When I hear Marine Le Pen, what we hear are extremist voices between 1939 and 1945,” he said of the National Front leader, who appeared in court on Tuesday over anti-Muslim comments.

Mr Daul, who was the only nominee for EPP president, was expected to be re-elected comfortably, with a vote on the 10 vice-president positions scheduled for today. Ireland’s Minister for European Affairs, Dara Murphy, is among 12 nominees for the positions.

Speakers yesterday emphasised the success of centre- right parties across Europe, with most denouncing the rise in support of left-wing political parties since the onset of the financial crisis.

“Spain is a strong country,” he said. “It is an example for us in the EPP about how to manage the crisis. In Spain, there are jobs and growths. If socialists and communists talk about the future in Europe, then let them come to Spain, let them see what the future looks like.”

“What is the left doing now?” he said. “In Portugal we have seen that the socialists are striving for a partnership with leftist extremists who want to leave Nato, leave Europe and leave the euro.”

The congress is being hosted by Spain’s governing Partido Popular party, which faces a general election on December 20th.

“We need parties that engage with politics in a serious way. Politics is not a TV reality show . . . Politics is about pensions, jobs, the future of your children,” he said.

Taoiseach Enda Kenny travelled to Madrid yesterday and will give the keynote speech today, which is expected to focus on Ireland’s economic progress since exiting the bailout.