Balkan states admit only a fraction of the 2,000 or so refugees who land daily in Greece 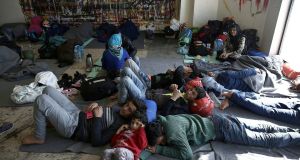 Migrants and refugees rest inside the old airport building in Athens, which is used as a temporary hosting shelter, on Friday. Photograph: Simela Pantzartzi/EPA.

The European Union’s top migration official has warned of a looming refugee “disaster” for the bloc, as Greece struggles to handle rising numbers of asylum seekers who are effectively trapped in the country.

Greece ordered its islands near Turkey and ferry companies to restrict the number of migrants travelling to the mainland, as Athens scrambled to set up temporary accommodation.

About 2,000 people land each day on Greek islands from Turkey, but police chiefs of Balkan states to the north have said their countries will let fewer than 600 cross their borders daily.

As EU members and Balkan states step up individual and group action on border security, a March 7th summit of EU leaders and Turkey is seen as crucial to tackling the crisis.

“If there is no convergence and agreement on March 7th, we will be led to disaster,” EU migration commissioner Dimitris Avramopoulos said yesterday. Last November, the EU offered Turkey €3 billion and a renewed integration drive in return for major steps by Ankara to improve the lives of refugees in Turkey and to stem the flow of migrants to Greece.

So far this year, however, more than 110,000 migrants have crossed the Mediterranean with most landing in Greece from Turkey. Last year, it took more than six months for a similar number to reach Europe’s shores.

Other EU measures are also failing: only about 600 of 160,000 people covered in a deal to distribute refugees around the bloc have been relocated and few rejected asylum seekers are being sent home. “In the next 10 days, we need tangible and clear results on the ground,” Mr Avramopoulos said, before lamenting a dramatic breakdown in EU co-operation. “If we believe that unilateral action is more effective than European action, then we are demolishing our common home.”

Greece was furious Austria refused to invite it to crisis talks this week with other Balkan states. Athens has since recalled its ambassador to Vienna and rejected a request for a meeting from Austria’s interior minister.

“The policies of Austria and Hungary are turning Greece into a giant refugee camp . . . What are we supposed to do – let people drown in the Aegean Sea?” said Greece’s deputy education minister Sia Anagnostopoulou. “Instead of making a plan, Europe is burying its head in the sand . . . Europe is unravelling.”

Greece’s northern neighbours this week slashed the number of refugees they allow in, with police officials in several Balkan states saying that only 500-600 would be permitted to cross their borders each day.