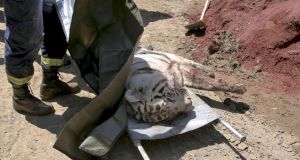 An official covers the body of a tiger killed near a zoo in Tbilisi, Georgia. Photograph: Tbilisi Police Press Service via AP

A tiger that escaped from the Tbilisi Zoo during flooding in the Georgian capital killed a man before being captured and killed, news agencies reported yesterday.

The interior ministry in the former Soviet republic of Georgia said the tiger was hiding at an abandoned factory that had been turned into a construction market when he attacked the man. The victim later died of his wounds at a hospital.

“We entered the depot and, suddenly, a white tiger rushed out of an adjacent room and attacked one of the workers, jumping at his throat and mauling him,” colleague Alexander Shavbulashvili said. “We broke the window of another room to flee, and the sound of breaking glass must have scared it and it ran away.”

Police commandos rushed to the site and killed the tiger. “It was a white tiger,” interior minister Vakhtang Gomelauri said. “We wanted to sedate it, but it was very aggressive and we had to liquidate it.”

An earlier ministry claim that the tiger also wounded another man proved wrong.

Georgian authorities have since been scrambling to contain the animals.

Hundreds of animals drowned or were killed, including six wolves found on the grounds of a children’s hospital, a bear and a hyena. A penguin reportedly managed to survive by swimming more than 56km to the border with Azerbaijan before it was captured yesterday.

The zoo had said on Tuesday that all of the missing lions and tigers had been found dead, with one jaguar unaccounted for, but yesterday warned that another tiger, a bear and a hyena were still on the loose.

That came after news reports that a tiger had killed a man.

The interior ministry initially said the victim had been killed by a lion, Agence France- Presse reported, and mobilised special forces to find the animal.

Nino Giorgobiani, a spokesman for the ministry, later corrected that assessment and identified the animal as a tiger, the agency said.

At least 17 people have been killed in the flooding, according to news agencies, including three zookeepers.

The surreal scenes in Tbilisi, including of residents herding a hippopotamus along a muddy street and of animal corpses scattered amid the debris of damaged vehicles and buildings, have captured global attention as Georgia struggles to come to terms with destruction wrought by the flooding. Some residents have expressed anger at the killing of animals, an action that authorities said was necessary to protect lives. – (Reuters/New York Times service)