Draghi’s severe warning forces Greeks back to drawing board 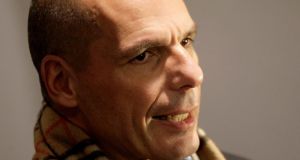 Greek finance minister Yanis Varoufakis: stance set out was rejected by all of his counterparts. Photograph: Orestis Panagiotou/EPA

Not for the first time in the Greek debt saga, the European Central Bank asserted its formidable power as Alexis Tsipras’s new government failed to find allies in his push for a big debt write-down from its euro zone creditors.

ECB president Mario Draghi intervened in a testy meeting of euro zone finance ministers on Wednesday night to stress that commercial banks in Greece were frozen out of private debt markets, necessitating reliance on emergency loans from the country’s central bank.

Draghi said, however, that such temporary assistance was already in jeopardy as the collateral provided by the banks in return for such aid was weakening by the day as their borrowing costs spiked.

This presented the threat of insolvency, warned Draghi, and with it the prospect of the banks’ collateral being called in. Greek banks would be left without cash in that event, with obvious consequences for the country’s citizens and the companies whose cash remains in its domestic banks.

Yet Draghi made it clear that a route out of the mire was still open to Tsipras and his finance minister, Yanis Varoufakis.

Greek banks are leaning on the national central bank because the ECB cancelled an alternative form of support – from euro zone central banks collectively – a week previously. Under ECB rules the country receiving such support must be in an EU-IMF programme to qualify. With Tsipras resisting any extension to the programme expiring on February 28th, the ECB governors said last week they had no option but to pull the support, which they did.

If the implication for the Tsipras administration was clear even then, Draghi went further on Wednesday night with a clear indication that ECB support could be restored if Greece allowed the programme to continue. “It was very telling,” said a high-level euro zone figure.

Greece always resisted any prolongation of the programme, but the stance set out by Varoufakis was rejected by each of his 18 counterparts. Ultimately, the Greek minister tentatively agreed to a joint statement in which all parties would say they were initiating immediate talks to find a temporary settlement in time for another meeting of ministers next Monday.

After phone calls to Athens, however, Varoufakis withdrew Greek support for the statement at the last minute. By that point there was disarray in the meeting room as the German minister, Wolfgang Schäuble, had already left for Berlin on the basis that the statement had been agreed. It was past midnight when grim-faced euro zone leaders – and IMF chief Christine Lagarde – provided a patchy briefing on the deadlock to reporters.

It was only after Tsipras met on his arrival in Brussels yesterday with Jeroen Dijsselbloem, chairman of the euro zone ministers, that an agreement was reached to start talks. At issue is some kind of a continuation of the current scheme, the very thing the new government had set itself against. As such it marks quite a big climbdown by Tsipras.

On the sidelines of his first summit meeting with EU leaders, it was expected he would set out his case to fundamentally rework the plan for Greece. After a short discussion the gathering of presidents, prime ministers and chancellors was then set to send the matter back to finance ministers. In Frankfurt yesterday, meanwhile, the ECB further raised the legal cap on the amount of aid the Greek central bank can give to commercial banks.

The hard talking resumes today in Athens. Quite where it leads is anyone’s guess.