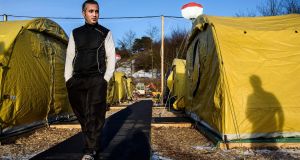 Mohamad Salai, a refugee, walks through the refugee tent camp in Naestved, some 60 km south of Copenhagen. Niels Ahlmann Olesen/EPA

After an emotional four- hour parliamentary debate, a large majority of Danish MPs backed a new immigration Bill that Copenhagen hopes will drive down asylum numbers, which reached 21,000 last year.

The new law will, in many cases, triple to three years the waiting period for family reunion applications, shorten the duration of temporary residence permits, and tighten conditions for permanent permits.

But the Bill’s most disputed measure will oblige asylum seekers to surrender cash and valuables above a value of 10,000 kroner (€1,340).

Prime minister Lars Løkke Rasmussen called the measures the “most misunderstood Bill ever” and bristled at comparisons to Nazi-era confiscation of Jewish valuables.

Copenhagen argues the new rules will ensure that migrants who can afford it will contribute to the cost of their accommodation. It will also bring migrants’ rights in line with those of jobless Danes, who are obliged to dispose of assets above a certain level before receiving welfare.

After a storm of criticism, the government more than tripled the original cash limit of 3,000 kroner (€402), and exempted from seizure items of sentimental value, such as wedding rings.

The UN refugee agency warned that confiscating valuables “sends damaging messages and runs the risk of fuelling sentiments of fear and discrimination”.