Denmark’s election and the debate on immigration

The rising, populist Danish People’s Party has forced its rivals to address the issue 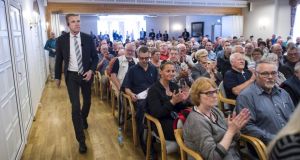 We’re at a low-key election rally at the Spanish Steps – not in Rome but in the red-bricked Danish town of Kolding in Southern Jutland, three hours west of Copenhagen.

Locals are attracted by the free goodies – windmills, hot dogs, flowers – and are encouraged to vote on their priority election issue by dropping turquoise balls into labelled glass vases. The clear winner: immigration.

When four million Danish voters go to the polls on Thursday, they will be preoccupied by the nascent economic recovery, the future of Denmark’s generous welfare state and a connecting issue between the two: immigration. How much immigration – skilled and unskilled labour, refugees and asylum seekers – do Danes think they need, can afford or want to keep the economy growing and the welfare state strong?

This debate is taking place all over Europe but is well-advanced in Denmark, thanks to the party behind the rally in Kolding.

Kjærsgaard was as uninterested in the labels as in taking office. Instead, she was the perpetual bridesmaid rather than bride of Danish politics, steering government policy on key issues from outside government in exchange for DF support.

The DF has mastered the Danish system where, to govern, Danish coalition governments don’t need a majority behind them – but must prevent a majority against them. In the last two years, and after a radical facelift, the DF has carefully calibrated a new set of messages: still critical of the EU and immigration, but easier on the ear.

As a result, the former stronghold of older and lower-income voters now attracts middle-class, urban Danes who were previously alienated by Kjærsgaard’s driven, divisive style. Now younger voters admit openly their support for the DF.

Polls suggest it could double its 2011 vote to more than 20 per cent, making it a crucial power broker in the next Folketing parliament.

As she talks, the man responsible for the DF’s rising fortunes arrives: the leader since 2012, Kristian Thulesen Dahl. “He’s very skilled,” whispers Kristine Jorgensen in admiration.

Perceptive and mild-mannered, and willowy in appearance, Dahl adopts a reasoned but firm tone in political debates. When talking to voters one-on-one in Kolding, he demonstrates charm galore.

Dahl says the economic cost of immigration is unacceptable and the current system, as managed by the outgoing Social Democrat government, is too lenient.

“If Danish people think that the immigration situation is out of control when we have the Social Democrats in power, that will help us to win,” he says.

As immigration becomes a Danish battle ground not seen since the 1990s, opinion is divided over whether or not the DF has radicalised mainstream political opinion on the issue.

One camp fears the larger parties have, for different political reasons, taken the populist DF bait and put Denmark on a populist path towards immigration it can ill afford, given its ageing population and falling birthrate.

Others suggest the DF has, unintentionally, had a constructive influence: forcing other parties to grab the political nettle of immigration and devise a sustainable approach to Denmark’s long-ignored integration problems.

Either way, the DF’s growing success could be a mixed blessing. Its generous social spending election promises are at odds with the budget freeze proposed by the liberal Venstre party it has vowed to support in the next term.

The two parties also disagree on EU policy. DF leader Kristian Dahl says his party “wants to support the Tories” for a new deal on immigration and social rights in the bloc.

A final dilemma: the higher the DF vote goes, the greater the pressure to enter office. Some 69 per cent of their supporters want them in power and DF leaders risk alienating voters unless they acquiesce.

But the lessons for populist parties entering office – such as Norway’s Progress Party and now the Finns in Finland – are clear and unappealing.

“There is a danger of having to take on responsibility and accept compromise,” said Prof Uffe Østergaard, a historian at the Copenhagen Business School.

“For now the DF want power but have promised not to run for government as they have more influence outside than in.”