Delicate balance of personal interest and peace in Ukraine 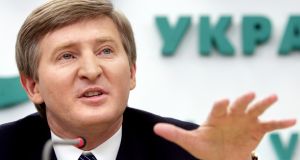 The only queues at the shell-scarred Donbass Arena are for food parcels from a charity run by Rinat Akhmetov (above), but now he is persona non grata in his hometown, and accused of seeking personal gain when he should have been saving Ukraine from war. File photograph: Sergei Supinsky/AFP/Getty Images 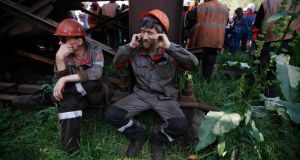 Employees of Azovstal Iron and Steel Works sit during a rally to protest against actions of armed separatists in Mariupol, eastern Ukraine, May 20th, 2014. Factories sounded their sirens in two cities of eastern Ukraine on Tuesday and steel workers held a peace rally in support of a call by Ukraine’s richest man, Rinat Akhmetov, for protests against armed separatists who plan to disrupt a May 25th presidential election. File photograph: Maxim Zmeyev/Reuters

Four summers ago, football fans from across the continent were heading for Donetsk for a semi-final of Euro 2012.

The match would be a sporting celebration for Ukraine and a crowning achievement for the Donetsk elite, a moment in the spotlight that would help banish the shadows that clung to them and their hometown.

Long associated with grime and crime, this industrial city and region were now pre-eminent in Ukraine.

Local man Viktor Yanukovich had overcome youthful convictions for robbery and assault, and a 2004 Orange Revolution that stopped him taking power through election fraud, to finally become Ukraine’s president in 2010.

Two years on, Yanukovich’s allies were running the government and security services, and his extended “family” of friends and relatives was swiftly turning political connections into immense personal wealth.

At the top of Ukraine’s economic tree sat a billionaire who had funded the rise of Yanukovich and his Regions Party, and whose own ascent and current travails are inextricable from those of his hometown.

The son of a Donetsk coalminer, Rinat Akhmetov came to prominence when his associate Akhat Bragin, known as Alik the Greek, was blown up while watching his football club play in October 1995.

Akhmetov took charge of Bragin’s business and sporting assets, growing the former into a coal- and metals-based empire that now employs 300,000 people in Ukraine, and transforming the latter – Shakhtar Donetsk – into a national football powerhouse and contender for European glory.

In 2009, Shakhtar (which means “miner”) won the Uefa Cup and moved into the spectacular new €350 million Donbass Arena, which would be a major venue for the Euro 2012 championship that Ukraine co-hosted with Poland.

As Yanukovich, Akhmetov and millions of their compatriots cheered the tournament’s success, they could not have imagined where they would be now.

The only queues at the shell-scarred Donbass Arena are for food parcels from Akhmetov’s charity, but now he is persona non grata in his hometown, and accused of seeking personal gain when he should have been saving Ukraine from war.

One of the few things upon which government supporters and separatists agree is that only Akhmetov enjoyed enough influence in Kiev and eastern regions to have a chance of brokering a peaceful settlement after Ukraine’s 2014 revolution.

“In Donetsk and Luhansk, they wanted to use the trouble to win concessions and favours,” Borys Filatov, now mayor of the government-run city of Dnipro, told The Irish Times as the crisis unfolded.

“They tried to make a barbecue, but burned down their own house.”

Many people share Filatov’s belief that Akhmetov wanted to use Ukraine’s post-revolutionary turmoil to boost his own power, but was sidelined when Russian players took charge in Donbass.

Akhmetov offered no support to the pro-western, anti-corruption “Maidan” uprising that ousted his ally Yanukovich, and he publicly condemned the separatist gunmen only after they had seized key buildings and gained a foothold in Donbass.

“I met him several times [in early spring 2014] and asked him to lead these processes,” said Denis Pushilin, speaker of parliament in the separatists’ so-called Donetsk People’s Republic.

“With all his influence and his levers, he could have prevented full-scale war. But unfortunately, he continued to put faith in his capital and business interests.”

And yet with $2.3 billion (€2 billion) he is still Ukraine’s richest man, and he continues to play by a unique set of rules.

Almost all Ukrainian businesses in separatist-held territory have closed down, and several of Akhmetov’s assets have been damaged by shelling or seized by people loyal to the new regime.

Many Ukrainians regard Akhmetov as a traitor for doing business under separatists who are propped up militarily, financially and politically by Russia.

But he sees his firms performing crucial work for Ukraine at this troubled time: paying taxes into state coffers and wages to citizens in the conflict zone, and supplying essentials like heat, light and coal to people on both sides of the frontline.

Akhmetov insists that Donbass must be part of Ukraine – though in what power balance with Kiev remains unclear – and he has not ruled out the possibility of taking a political role in Donetsk as part of its reintegration into the country.

“Rinat Akhmetov is ready to do anything to stop the war, to stop the suffering of people,” his press service said recently.

“He is indeed ready to do everything that depends on him and even more . . . and remains an advocate of reaching peace at a negotiating table.”

The billionaire has discussed the conflict with senior western officials and, according to someone familiar with those talks, they “see him as an element of the solution, as part of the bridge drawing Donbass back into an integrated Ukraine”.

But a deal to put Akhmetov in charge of Donetsk would be unacceptable to those in Ukraine who demand an end to oligarchic rule, as well as to separatist leaders who have now banned him from areas they hold.

With sanctions-hit Russia unwilling to take on the financial burden of Donbass, however, the separatists have to deal with Akhmetov – the only major employer and a big aid provider in separatist areas, and yet a Ukrainian taxpayer.

“We could close his enterprises in a few hours but we can’t do much to force him to pay taxes,” Pushilin explained in his plush office in Donetsk.

“With payment of the first [Russian] rouble or [Ukrainian] hryvnia he would be put under sanctions and we would lose tens of thousands of jobs.”

Life was never easy for most people in Donetsk, but it is now a shadow of its old self: much of the city’s pre-war population of 1 million has fled, jobs are scarce, pay and pensions minuscule, health care patchy and rule of law non-existent.

All is calm however, at the vast estate that Akhmetov carved out from the city’s botanical gardens, and where staff await the tycoon’s return from Kiev.

“Rinat Akhmetov left Donetsk for three days on May 20th 2014 and, unfortunately, has been unable to return to his beloved home city, which he really misses,” his spokesman, Jock Mendoza-Wilson, told The Irish Times in Kiev.

“Since the first day of the conflict, [HE]has repeatedly stated that Donbass can be happy only in a united Ukraine. Today he continues to hold this view.”

For now, it is beyond even Akhmetov’s powers to ensure a happy homecoming; only a call from Russia would convince the separatists to allow him back.

“The situation with him and his enterprises is in limbo,” said Pushilin in Donetsk.

“The question of what would happen if he turned up here is probably one for the security services. But I don’t think anyone would call him a welcome guest.”