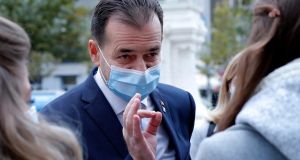 Romania’s premier and the leader of PNL Ludovic Orban speaks with reporters during a campaigning event in Bucharest, Romania. Photograph: Robert Ghement/EPA

Romania’s governing Liberals hope to retain power in parliamentary elections on Sunday, despite seeing their popularity dwindle in recent months as coronavirus took a heavy toll on the nation and battered its economy.

Surveys suggest the National Liberal Party (PNL) of prime minister Ludovic Orban will attract about 30 per cent of votes, ahead of the opposition Social Democrats (PSD) with about 25 per cent and the progressive USR-Plus party on about 17 per cent.

If victorious, Mr Orban is likely to seek a coalition with USR-Plus, which is popular among younger urban voters. He may also approach Romania’s ethnic Hungarian party or the party of former Romanian president Traian Basescu, if they gain the 5 per cent needed to enter parliament.

The PNL was eager for snap elections before Covid-19 struck, but the impact of the pandemic has soured sentiment towards the government and eroded its lead over the PSD.

The Liberals took power in October 2019 when a PSD government was ousted in a no-confidence vote, following three years of turbulent rule in which the party sought to weaken anti-corruption legislation to the benefit of some of its most prominent members and backers, including its then leader Liviu Dragnea.

The PSD’s bid to blunt anti-graft laws and extend government influence over the judiciary sparked Romania’s biggest protests since its 1989 anti-communist revolution and strained ties with the European Union.

Ultimately, the PSD’s efforts failed, Mr Dragnea was jailed on graft charges and the party was forced to go into opposition.

Yet recent months have shifted Romanians’ focus away from corruption to coronavirus, which has infected 500,273 people in the country of 19 million and claimed 12,052 lives.

The PSD accuses the government of mishandling all aspects of the crisis, from harming the economy by closing shops and markets, to failing to improve Romania’s ailing health system and allowing millions of defective face masks onto the market.

“They closed your kids’ school. They closed your market where you bought Romanian products. They destroyed your business . . . They didn’t test you, they made you buy non-compliant masks and told you it’s your fault for getting infected,” PSD leader Marcel Ciolacu wrote on Facebook on Friday. “Vote to take your life back!”

Mr Orban says Romania cannot afford the PSD’s populist promises, such as a 40 per cent increase to pensions next year.

He has pledged to keep fighting corruption and modernise Romania’s infrastructure, including its ageing hospitals, after 10 coronavirus patients died in a fire at a clinic in the city of Piatra Neamt last month.

Romanian president Klaus Iohannis – who strongly supports the PNL – has said that with a “new majority in parliament, that is responsible and fully committed to the good of Romanians” he and the next government will “rebuild the entire health system from the ground up”.