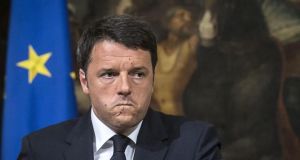 Italian prime minister Matteo Renzi whosaid the collapse of post-Gadafy Libya was one of the main reasons behind the Mediterranean migrant crisis. Photograph: EPA

The absence of a coherent ‘plan B’ for post-Gadafy Libya is one of the main problems behind the Mediterranean migrant crisis, according to Italian prime minister Matteo Renzi.

Speaking to the RTL radio, Mr Renzi said: “The international community didn’t really ask itself what would happen after (the fall of) Gadafy. Libya has been torn apart and now we need a precise strategy...”

Speaking ahead of a summit of EU Foreign and Interior Ministers today in Luxemburg on Monday, Mr Renzi said Italy would be asking its European partners to consider the Libyan crisis “in a more serious manner than in the past”.

“We have got to deal with the Libyan problem at its roots. A joint European operation against the people traffickers is possible but it has to be carefully aimed...Italy has already arrested 976 of them but is it possible that we are the only ones to do so,” he said.

Mr Renzi, who spoke yesterday to German chancellor Angela Merkel and to Greek prime minister Alexis Tsipras, said that he was confident that the EU could arrive at a unanimously agreed position on Libya and the boat people issue.

Mr Renzi ruled out any question of a military intervention in Libya, calling such a move an “absolutely excessive risk at this moment”.

The Italian coastguard ship, the Gregoretti, carrying 27 of the 28 survivors of Saturday night’s tragedy as well as the bodies of 24 victims, pulled into the Maltese port of La Valletta this morning. It is expected that the boat will make its way from there to Catania in Sicily with the survivors.

Even this morning, it remains unclear just how many people died in Saturday night’s tragedy with the figure being placed at somewhere between 700 and 900 people.

Initial accounts from survivors indicate that many of the people on the overcrowded fishing vessel had been shut into the ship’s hold and thus had no chance to escape when the ship overturned.

If these initial reports prove correct then it is possible that as many as 1500 boat people have drowned in the Mediterranean this year as opposed to 17 in the same period last year.

The increased death toll is much more likely the result of the fact that the current Mediterranean border control run by the EU Frontex agency’s ‘Triton’ scheme, unlike its Italian predecessor ‘Mare Nostrum’, does not have the means or the mandate to operate a wide-ranging “search and rescue” operation.

In the meantime, an indication of the trafficking that underpins these boat people crossings emerged this morning with Italian media reports that Palermo-based police have arrested a number of Eritreans, Ethiopians, Ivoirians and Ghanaians, resident in Sicily.

Investigators believe they may form part of an organised crime group which runs many of the boat people crossings.

Given that the average asking price for a place on one of these boats is approximately €1,000, a boat similar to that which sank with such a heavy loss of life on Saturday night may have earned up to €700,000 euro for the traffickers.

Investigations into the Mafia Capitale scandal in Rome of last December indicated that Italian organised crime elements have linked up with African and other criminals in this human trafficking operation.

Palermo investigators believe Eritrean and other nationals based in Sicily provide support to help migrants escape Italian holding camps and make their way north towards other European countries such as Germany, France, Norway and Sweden.

Many of the boat people who make it to Italy do not want to be registered in that country since they believe other EU countries may afford them a better reception.