Chilling testimony as French mother on trial for infanticide 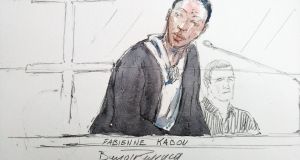 Court sketch shows Fabienne Kabou (39) speaking during the first day of her trial at the Assize Court, in Saint-Omer. Photograph: Benoit Peyrucq/AFP/Getty Images 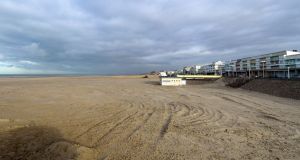 On the opening day of her trial on Monday, Fabienne Kabou told the court in the northern town of Saint-Omer that she killed her infant daughter Adelaide “because it was simpler that way”. The 39-year-old Franco-Senegalese woman wept in the dock, describing days when she couldn’t get out of bed, penned in by “thundering walls”.

On November 19th, 2013, Kabou took 15-month-old Adelaide from the Paris suburb of Saint-Mandé to Berck-sur-Mer, on the Channel coast. She chose Berck, which means “yuck” in French, “because it sounded ugly”.

For years, Kabou had filled notebooks with her dreams, thoughts and hallucinations, including the voices of dead ancestors who spoke to her. On November 20th, the day Adelaide’s drowned body was found by prawn fishermen, she inscribed the word “nothing”.

Three psychiatric teams concluded that Kabou suffered from paranoid delirium but was fit to stand trial. The jury in the assize court in Saint-Omer could sentence her to life in prison.

Kabou’s testimony to investigating magistrates makes chilling reading. She told Lafon she was going to leave their child with her mother in Senegal. “The hardest thing was going out the door,” she said. “After that, everything went smoothly, as if I had the wind at my back. I felt I was carried along. I couldn’t bring myself to say ‘stop’.”

Kabou took Adelaide on the train and coach, then rented a room in a seaside hotel. At about 9pm, she went out with Adelaide, dressed in a warm jumpsuit with fur around the face. She hid the pram behind a wall and carried the infant on to the beach.

“It was as if there were a spotlight guiding me in the dark,” Kabou said. “Adelaide started slightly, as if she had just woken. She sought my breast. I breast-fed her. I remained standing. I held her close and then, I don’t know, I said no, no, no. I didn’t stop saying no . . . I cried, as if I was telling someone I can’t do such a thing. But I did it.”

Kabou stopped a few metres from the rising tide. “She must have drowned right away. I don’t know how fast the sea was rising, but it was very close. I set her down, I spoke to her, I asked her forgiveness. She didn’t sense any danger. I was next to her, on my knees. I hugged her a long time. She wasn’t really asleep, but calm. I don’t know how long I stayed there, asking her to forgive me, talking to her. Then I turned on my heels and I ran.”

The prosecution says the fact that Kabou studied train and tide timetables proves she premeditated the murder. When she was arrested a few days later, she spoke of difficulties caring for the child and in her relationship with Lafon.

Psychiatrists reported that it was “to protect her child from evil that [Kabou] hid her pregnancy and did not register her birth”. They said she murdered her infant “with the conviction that her child was in great danger”.

Kabou said she chose the sea because it was “like amniotic fluid”. Lafon said she believed in the undersea realm of an African goddess called Mami Wata.

According to Kabou’s lawyer, Fabienne Roy-Nansion, she said, “The life Adelaide would have had was like a disease from which I saved her.”

Kabou was born in Dakar, where her father was a translator for the UN and her mother worked in publishing. She came to Paris to study architecture, and angered her father by switching to philosophy. She reportedly has an above-average IQ of 135, and began a master’s thesis on Wittengenstein’s theory of reality.

Kabou lived with Lafon in his artist’s atelier. She had two abortions, and hid her third pregnancy from him until it was too late to terminate it.  She gave birth alone, when he was away.  He seems to have taken little interest.

Kabou withdrew from the world.  She halted her studies, closed her bank account, saw no one. She devoted herself to little Adelaide, dressing her with care, cooking special dishes for her.

Kabou’s mother learned of Adelaide’s short life and death in the judge’s chambers. She and a priest were the only mourners at the infant’s burial in a Boulogne cemetery. “Adelaide, 20 November 2013” says the granite tombstone where well-wishers still leave toys and flowers.