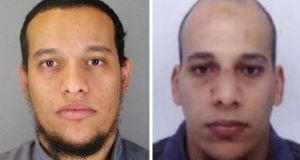 Said Kouachi (left) and Cherif Kouachi. A man who hid in a cupboard for eight hours to escape the Charlie Hebdo gunmen is suing television and radio stations, accusing them of having put his life in danger during the attacks in Paris. Photograph: Judicial Police of Paris/PA Wire

A man who hid in a cupboard for eight hours to escape the Charlie Hebdo gunmen is suing television and radio stations, accusing them of having put his life in danger during the attacks in Paris.

The Paris prosecutors’ office confirmed it had opened an investigation after Lilian Lepere said media coverage had risked his safety as he hid from brothers Chérif Kouachi and Saïd Kouachi in January.

Seventeen people were killed in the Islamic extremist attacks around Paris that began with an assault on the offices of satirical magazine Charlie Hebdo, and ended with police raids on a printing plant and a kosher supermarket where hostages were being held. The three attackers – the Kouachi brothers and Amedy Coulibaly – also died.

At the printing plant in Dammartin-en-Goele, north of Paris, hostage Lilian Lepere was hiding in a cupboard under a sink, apparently unknown to the two gunmen there, when at least three television and radio stations revealed his possible presence.

He was eventually released unharmed.

On January 9th, as police surrounded the printing plant, lawmaker Yves Albarello revealed on radio station RMC that an employee was still hiding inside the building.

Later, Lepere’s sister Cindy confirmed in an interview to public television station France 2 that she believed her brother to be in the plant and that the family had stopped calling him in order to not compromise his hiding place.

A journalist from TF1 television also reported the information.

Lepere hid under a sink in the building after the Kouachi brothers – who two days earlier had killed 12 people at the Charlie Hebdo offices – burst into the shop and locked themselves in.

His employer was initially taken hostage, but was later released. Lepere remained in hiding until the Kouachis were gunned down by special forces.

The prosecutors’ probe is into TF1 and France 2 television stations, as well as RMC radio, all of which revealed Lepere’s situation.

This is not the first time that French media have been criticised for the way they covered the attacks. In February, France’s broadcasting watchdog issued formal warnings to 16 television and radio stations for serious “breaches” in their coverage.

The watchdog agency, known as CSA, accused the stations of putting the lives of hostages in danger and reprimanded two stations for broadcasting images of the gunmen shooting a policeman in the head outside the offices of Charlie Hebdo.

Warnings were also issued for identifying the two gunmen despite official requests not to do so.

The regulator also slammed the live video feeds of the police assault on the kosher supermarket where Coulibaly killed four people and took others hostage.

BFM TV was also censured for reporting that someone was hiding in the supermarket during the siege, and prosecutors have already launched a probe into this, after the former hostages accused the television network of putting their lives in danger.

In the UK, Sky News avoided censure for showing a clip of the murder of a police officer during the Charlie Hebdo attack, after an investigation by the broadcast media regulator in April cleared the graphic footage.

Sky News, which aired the amateur footage repeatedly on the day of the attack, showed the police officer – later named as Ahmed Merabet – being shot, but edited out the final seconds when he receives a second shot to the head.

The officer’s brother, Malek Merabet, had criticised media outlets and websites for showing the footage. “How dare you take this video and broadcast it? I heard his voice, I recognised him, I saw him being killed and I continue to hear him every day.”