Charles Bianconi and the ‘Ryanair of the 19th century’

200 years ago an Italo-Irish entrepreneur began taking passengers from Clonmel to Cahir by horse-drawn carriage. It was the beginning of Ireland’s first regular public transport 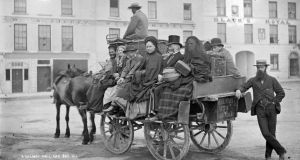 Have cart, will trundle: a Bianconi mail carriage in Galway around 1880. Photograph: National Library of Ireland 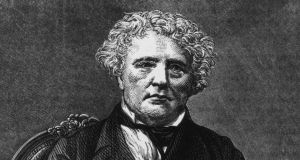 “Charles Bianconi was a bloody good salesman. He was always good at developing his brand. He got engravings done on his cars, and no one else was doing anything like that. He was possibly the first person in Irish transport history who tried to brand his business,” says David Dickson, a professor of history at Trinity College Dublin. “Bianconi was, you might say, the Ryanair of the early 19th century, and it certainly made a difference.”

Charles Bianconi, sometimes referred to as the man who put Ireland on wheels, is credited with introducing relatively cheap and fast public transport to the country 200 years ago.

The first trip on his open-top horse-drawn carriage took passengers from Clonmel to Cahir on July 6th, 1815. Both towns are on the River Suir, in Co Tipperary, but travel by water meant a journey of more than 38km; by land it was only 16km. Today the same journey is a 20-minute drive; then, most people’s only option was to walk.

“It was cheap, but it was also the fact it was a regular service,” says Arnold Horner, a retired professor of geography at University College Dublin. “It was going at a speed of about 8mph or 9mph. He was charging between a penny and tuppence a mile, and for some people that was pretty dear compared to the cost of walking.

“But it was the convenience, that you could get from Clonmel to Thurles, for instance, and back in a day. Whereas if you were walking it would have taken you the whole day.”

Horner, who has a particular interest in pre-Famine transport, says Bianconi based his business in Clonmel and gradually expanded it to include more of the south of Ireland, and some of the west. A similar service existed in Dublin, but it wasn’t regular.

“You certainly had what were called cars used for short distances, like between Ringsend and the city,” Dickson says. “But there was no service between towns on anything like a regular basis before 1815. I think Bianconi was first in that sense.Why he developed the service that he did was really to do with the particularity of the southeast and the fact that you have more substantial market towns there than almost anywhere else in the country.

A Cork merchant, John Anderson, had offered a limited service to passengers on his mail coach, which brought post between Dublin, Cork and Limerick in the 1790s and early 1800s. But the coach didn’t run according to a timetable and was expensive, he says. “Bianconi was much cheaper, so shopkeepers and the tradesmen could use Bianconi.”

Horner adds: “It helped join up the south and west of Ireland in a way that hadn’t been available before. He introduced a new regularity to transport in Ireland.”

Bianconi set up shortly after the Battle of Waterloo and the end of the war in Europe, which is often suggested as the main reason for his success. Peace flooded the market with cheap horses and out-of-work horsemen. Bianconi bought horses for between £15 and £40, and the quality of his animals was often remarked on.

Bianconi isn’t given enough credit for his business acumen, according to Dickson.“In one sense it was a bad time, because the years immediately after he gets started were years of great economic difficulty and recession,” he says. “In 1820 there were huge bank failures in Munster. So against that backdrop he managed to do something.”

At his peak, around 1845, Bianconi had about 1,400 horses covering more than 6,000km (3,800 miles) a day across 123 towns. He had moved on from two-wheeled jaunting cars led by one horse each to four-wheeled coaches with several horses pulling them.

Bianconi’s business came under threat with the introduction of rail transport in 1843.

“He adapts very quickly to the railways,” says Dickson. “His service becomes mainly short-distance servicing of railway stations rather than the cross-country services he was doing before. From really the time of the Famine the service is adjusting, but Bianconi dies a wealthy man.”

Bianconi died just before his 90th birthday, in 1875. He left his business to his employees and his land to the parish for the construction of a church. The Bianconi chapel remains in Boherlahan, Co Tipperary, as does his Clonmel headquarters, on what was then Bagwell Street and is now Parnell Street.

Bianconi’s assistant, Daniel Hearn, looked after the premises and later converted it into Hearn’s Hotel, which overlooks the stables and still operates today.

His main depot in Thurles is now Mcloughney’s boutique; the stables he used there remain. Many of his staging posts – stopping points along the routes to let passengers and horses rest – had inns that still trade along major routes.

Anthony’s Inn in Pilltown, Co Kilkenny, was originally a Bianconi inn, and the Bianconi in Killorglin, Co Kerry, retains the name. Many more exist, particularly along the Great Connaught Road.

“I don’t know that anybody claims to have a Bian car,” says Dickson. “But the fact is, very few people in 19th-century Ireland, commercial folk, were as celebrated in their lifetime as Bianconi was. It was a rags-to-riches story, and because he seemed to be a genuinely pleasant individual, who didn’t seem to make enemies, he seems to have gotten a lot of good press.”

An Italian in Ireland: the life of Charles Bianconi

Bianconi was born on September 24th, 1786 in Tregolo, near Como, in Italy.

He was christened Carlo but anglicised his name to Charles when he arrived in Ireland in 1802.

He worked as an engraver and printseller in Dublin, near Essex Street, under his sponsor, Andrea Faroni, when he was 16.

His first service – Clonmel to Cahir – took five to eight hours by boat but only two hours by Bianconi’s carriage.

Travel on a ‘Bian’ cost one penny farthing a mile.

In 1832 Bianconi married Eliza Hayes, the daughter of a wealthy Dublin stockbroker. They had three children.