Cameron to press for EU deal on fringes of summit 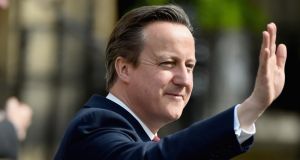 British prime minster David Cameron: he will come face to face with EU leaders for the first time since his party’s decisive victory in the British general election two weeks ago. Photograph: Jeff J Mitchell/Getty Images

British prime minister David Cameron is expected to make his opening salvo in his bid to renegotiate Britain’s relationship with the European Union when he meets his EU counterparts on the fringes of a two-day Eastern Partnership summit which begins this evening in Riga.

Mr Cameron will come face to face with EU leaders including German chancellor Angela Merkel and French president François Hollande for the first time since his party’s decisive victory in the British general election two weeks ago. The election of a majority Conservative government has paved the way for an in-out referendum on EU membership by 2017.

While the summit is officially dedicated to discussing the EU’s relationship with former Soviet states to its east, British officials have made it clear that Mr Cameron intends to press for change on the margins of the summit.

Earlier this week France’s minister for European affairs, Harlem Désir, played down the possibility of an EU treaty change to facilitate Britain’s demands as it seeks to renegotiate its relationship with the EU.

“It has to be done without amending the treaties. We will not accept any reconsideration of our basic principles, like freedom of movement,” Mr Désir said. But while EU states – including Germany – remain opposed to treaty change, there is a growing sense among EU officials that national capitals are prepared to meet at least some of Britain’s concerns.

Reports yesterday suggested that Dr Merkel’s ruling Social Democrats party was in favour of an early referendum if possible, following suggestions that Mr Cameron may schedule a referendum for late 2016.

The Eastern Partnership summit will also be Mr Cameron’s first opportunity to meet European Commission president Jean-Claude Juncker and the head of the European Council, Donald Tusk – the EU’s most senior officials – since their election.

The commission’s proposal underlined the EU’s obligation to “legislate only where and to the extent it is necessary”. “We are listening to the concerns of citizens and businesses – especially [small businesses] – who worry that Brussels and its institutions don’t always deliver rules they can understand or apply,” said European Commission vice-president Frans Timmermans.

The Dutch commissioner is widely expected to play a key role in negotiating with Britain.

While 25 out of a total of 28 EU leaders are expected at the Riga summit, Taoiseach Enda Kenny will not attend due to Friday’s referendums. Minister for European Affairs Dara Murphy will represent Ireland, while the Luxembourg and Spanish premiers will not be in attendance.

The previous summit, in Vilnius in November 2013, sparked the Maidan protests in Kiev and the ensuing violence in Ukraine, when Ukrainian president Viktor Yanukovich reneged on a pledge to sign an association agreement with the EU.

Few specific decisions are expected at the two-day meeting.