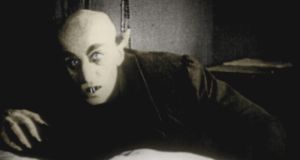 Max Schreck in the lead role of Nosferatu in the 1922 expressionist film.

A man looks at a crypt of the Murnau and Plumpe families in Stahnsdorf, Germany. Grave robbers have stolen from a crypt the head of German expressionist cinema great Friedrich Wilhelm Murnau, director of the silent-film vampire classic ‘Nosferatu’. Photograph: Ralf Hirschberger/AFP /Getty Images

Now, 84 years after his premature death, Mr Murnau is back in the news after grave robbers broke into his crypt and made off with the head of his embalmed body.

The manager of the Southwest Church cemetery in Stahnsdorf, outside Berlin, said it was difficult to know when exactly the graverobbers struck. “I am sure this happened between the 4th and 12th of July,” said Olaf Ihlefeldt to the Bild tabloid.

Local police have opened an investigation into the theft. Traces of wax found near the mausoleum have led to speculation that it may have been part of an organised ritual. That prompted Bild to splash the news under the headline: “Did Satanists steal ‘Nosferatu’ director’s head?”

The theft has revived interest in the supposed curse surrounding the director and his notorious Nosferatu. The 1922 film is considered an expressionist masterpiece but was not a commercial success at the time, due in part to copyright issues with the estate of Dracula author Bram Stoker.

During filming of Nosferatu, cast members were reportedly so terrified of their leading man, Max Schreck, that they suspected Murnau of hiring a real vampire. Fears the cast had been working with the undead dimmed somewhat in 1936 when Schreck died suddenly, aged just 56.

Nosferatu cameraman Fritz Arno Wagner broke his neck in 1958 and died on set. Murnau moved to Hollywood in 1926 to direct Sunrise, winning three Oscars in the first year they were awarded.

He died in mysterious circumstances five years later after a car crash in Santa Barbara. At the wheel of his car at the time was a 14 year-old man-servant with whom Murnau was reportedly having an affair.

The ensuing scandal was so great that few of early Hollywood’s stars came to his funeral and just 11 people attended his burial in Stahnsdorf, among them Greta Garbo and fellow director Fritz Lang.

The graveyard management said that, regardless of whether Murnau’s head is ever found, they are likely to seal his crypt or even rebury him in the ground.