Greek Letter: neo-fascist party Golden Dawn is racist, anti-Semitic, anti-gay and anti-Muslim, and has 6% of the popular vote 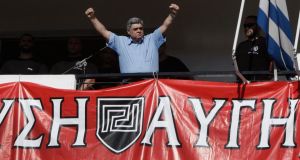 A report in these columns in July that an Italian senator had referred to the black Italian minister for integration as an “orangutan” should not give readers the impression that xenophobia is exclusively Italian. After all, it was the Greeks who, unwittingly perhaps, invented the word, even though up to now foreign guests (xenos) have been honoured and welcomed.

But also last month, Nikos Michaloliakos, leader of Golden Dawn (GD), Greece’s neo-fascist party, referred to two Greek citizens, Giannis Antetokounpo and his brother Thanassis (sons of Nigerian immigrants), as “chimpanzees”. Giannis is a rising star in basketball. Last year a member of the highly successful Greek national basketball team, Sophocles Schortsianitis (Greek father, Cameroon mother), was also denounced by another GD MP for being insufficiently Greek. “Greeks have never been black” the GD leader proclaimed. He should read Martin Bernal’s Black Athena, which argues that ancient Greece, probably including its genetic structure, derived much from Africa and the Middle East.

Swastika symbol
But racism is not GD’s only policy. It also pursues anti-gay, anti-Semitic and anti-Muslim policies and activities, encouraging arson attacks on synagogues and mosques in an effort to purify Greece of all non-Greek elements. In doing so it has secured 18 of the 300 seats in parliament – 6 per cent of the total vote, which in Ireland would give a neo-blueshirt party 10 Dáil seats.

Golden Dawn is in direct political descent from the military junta of 1967-1974, which it reveres. Its symbol is a version of the swastika, members give the Nazi salute, deny the Holocaust, and at a recent rally they sang the Nazi marching song Horst-Wessel-Lied, which is banned in Germany. Hitleresque harangues against Jews have reached the point where Michaloliakos lays the blame for the world economic crisis at the doors of an alleged international Jewish conspiracy, calling Jews “the absolute evil”.

Vigilante groups in the cities pick on immigrants such as Afghans for beatings, to which the police (many of whom are GD supporters) turn a blind eye. At the GD food kitchen for the needy, production of Greek identity papers is required – or a beating is likely to be administered.

At a time of austerity, with everyone feeling the economic pinch, it’s not difficult to understand why Greeks should feel some resentment at the huge scale of legal and illegal immigration through Greece’s porous borders. But the idea that you should not be in Greece at all unless you have four Greek grandparents is untenable. Perhaps few in Greece would argue with a “Greece for the Greeks” slogan, but to suggest that all foreigners should be expelled does not sit well with the concepts of democracy or inclusivity, to say nothing of EU laws.

If Antetokounpo had been white and of Finnish origin rather than Nigerian he might not have attracted the “chimpanzee” insult but he would, by GD’s standards, be ineligible to represent his country.

It’s not all that long ago (1985) that the then bishop of Limerick stated that you could not be Irish unless you were Gaelic, Catholic and nationalist. If a neo-blueshirt party had the power to adopt GD-style policies, it would call for the expulsion of public figures such as Paul McGrath, Simon Zebo, Kevin Sharkey, and Seán Óg Ó hAilpín, while former TD Moosajee Bhamjee and current minister Leo Varadkar would also be on the next boat.

Public support
Under these rules, Éamon de Valera could not have made the cut for a place in “Irish-Ireland”. In Greece, former prime minister George Papandreou, with an American mother, would be out, despite an impeccable political ancestry.

Before the 2012 election, Michaloliakos stated “we are outside the political system”, indicating his disaffection from current democratic processes. GD is no longer “outside the system”. Public support is increasing; the party, according to opinion polls, is on 10 per cent, which would give it 30 seats in parliament.

One citizen echoed Michaloliakos when he pointed out that GD is “doing what the politicians should be doing. There’s a hole, and they fill it” – referring to GD’s vigilante presence on the streets.

In a small village in Corfu, 44 people voted for GD – far higher than the national average and an indication of local frustration.

Subsequently, an English resident of the village was threatened by a neighbour. The fact that someone whose judgement one respected and whose friendship one cherished could give his support to an out-and-out fascist party is a measure of the disenchantment felt by many Greeks with mainstream politics.