Berlin’s rubble women did much of the post-war work

As Germans remember the rebuilding of their country, nobody has thanked the women 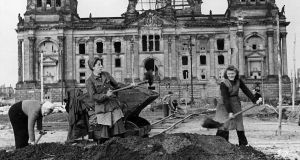 Trümmerfrauen: women clear rubble and recycle bricks outside the Reichstag, in Berlin, after the end of the second World War. Photograph: Ullstein/Getty 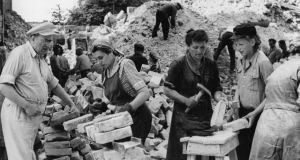 Trümmerfrauen: women clear rubble and recycle bricks in Berlin after the end of the second World War. Photograph: Ullstein/Getty 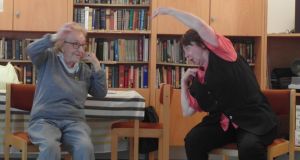 On a sunny Tuesday morning in Berlin I’m doing seated gymanstics with a group of women to the swelling melodies of Johann Strauss. Most are in their 80s, some are in their 90s and all are beautifully turned out – cardigans, brooches, slacks – with not a tracksuit in sight.

As we stretch this way and that in time with Wiener Blut the women exchange hilarious jokes about the exercises and each other. One woman is being ribbed for wearing a skirt that rides up as the class progresses. “Just because I have the legs for it and they don’t,” Frau Ludwig says hotly.

What these women have in common is that they were all teenagers and young women when the Nazis took over, in 1933, triggering the second World War in 1939 that returned to devastate Germany.

Exactly 70 years ago – May 8th and 9th, 1945 – was the Stunde Null, the zero hour after Germany’s capitulation. Among the women here are some of Berlin’s last remaining Trümmerfrauen, the so-called rubble women.

With their men dead or prisoners of war, these women are the ones who set about clearing up the ragged ruins of Germany’s cities. They worked in improvised lines, passing along buckets of bricks, knocking them clean of mortar and piling them up for reuse.

Seven decades on, Germans will remember this weekend the defeat of Nazism and the long road to rebuilding their country. Among the ritualised ceremonies, however, few here seem interested in talking to the women who did the hard work.

As a Strauss waltz reaches its soapy climax, 97-year-old Hildegard Görlitz swings her arms energetically in time with ther other ladies. She stretches her arms to her toes with the others but doesn’t quite make it.

“Hitler was an odd one”

Ask her about Hitler and his Nazi movement and she shoots back: “He was an odd one. We never supported him or any party. To be a decent person and live a decent life you don’t need to support a party.”

Prewar Berlin was a heated and dangerous place, she says, with regular running street battles between the Nazis and their many political enemies. “The communists were no walk in the park either,” she adds drily. “Between the political fronts here you had a big mass of ordinary people. Only when the imprisonments began after 1933 did many realise what Hitler was up to.”

Despite nearly 100 years to look back on, Hildegard says she prefers to look forwards. When she does look back, however, she remembers the air-raid sirens over Alexanderplatz, emerging from a bunker to see buildings in ruins and the sun blacked out by smoke and soot. After May 1945 life was an exhausting grind of daily survival.

“The men only came back slowly from the war, so it was the women who did most of the work here,” she says. “We had to sort the various bricks and rubbles, so they could be reused.”

She worked in eastern Berlin, based in a courtyard that was occupied by Russian soldiers. “They worked us like blacks, and a Russian officer kept watch to make sure nothing happened,” she says.

Another member of the gymnastics group, Anni Kopitz, is 90 years old. She didn’t work as a Trümmerfrau, but she remembers the lines of women, the soldiers’ gazes and the whispered stories of rapes, pregnancies and suicides. “The Trümmerfrauen were considered fair game,” she says, tears in her eyes.

All of this in a 45-minute gymnastics class – stretching to Strauss – that is strenuous but hilarious. It’s hard to concentrate because we’re all laughing so much between the shocking stories of 1945.

Then we troop upstairs for a lunch of sausages, sauerkraut and mashed potatoes. All the women live together in an apartment complex in western Berlin, and for many Tuesday’s class and lunch are the highlights of their week.

None of the women here who helped rebuild Germany remembers anyone ever saying thank you. Their only contact with the city government is a battle over the slow withdrawal of all but statutory services. “No one is interested in us. There is no full-time care worker, so we take care of ourselves,” says Renate Adly, the resident who volunteers to lead the gymnastics class.

The complex depends on donations to survive, and many of its residents live on the poverty line, she says. Some have just €3.55 a day to spend. “They have the choice between taking the bus and eating.”

Making matters worse, the only mention of the Trümmerfrauen in the lead-up to the 70th anniversary of the second World War’s end is a new book, The Rubble Women Myth. In the book Leonie Treber, a 34-year-old historian, suggests that the Trümmerfrauen were far less numerous than in popular memory and that the famous images of women passing buckets of brickets were propaganda photographs to motivate more women to assist.

Her claims have stung the remaining Trümmerfrauen. After making their peace with official apathy, many see the book as a final insult in their final years. Some suggest that the historian’s real interest is stirring up controversy and boosting her professional profile – at their expense.

With millions of German men still prisoners of war for years after 1945, the Trümmerfrauen ask, who else but the women could have cleared the rubble?

Listen to the last of the Trümmerfrauen and you soon realise that they have no time for labels like heroine, victim or anything else. As women have done throughout history, these women in Germany’s ruined cities looked around and did what had to be done.

Renate Adly, originally from the western Ruhr region, which was heavily bombed by the Allies, says women set to their difficult, tiring task of their own initiative. “They were just women working with their hands in half-facades of houses or putting the pavements back together.”

As the postgymnastics lunch winds up with coffee and home-made cake, and Adly’s ladies head off – two on walking frames – the softly spoken gymnastics course leader steels herself. “It was dangerous work,” she says, “and that historian has no clue.”

Germany owes its Trümmerfrauen a debt of gratitude. This is the last chance to thank them.