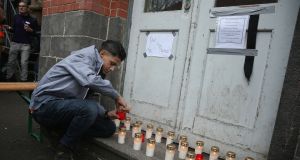 A young man lights a candle on Wednesday at a makeshift memorial to a Syrian man believed to have died outside the central registration office for asylum seekers in Berlin. The story of the man’s death turned out to be a hoax. Photograph: Sean Gallup/Getty Images

Did you hear? A 13-year-old girl in Berlin was abducted by asylum seekers and gang raped for 30 hours. And a 24-year-old Syrian man in Berlin died of exposure after waiting all night in the cold before the city’s asylum authority.

The only reaction to such shocking news is: “You couldn’t make it up.” But twice this week Berliners learned that, actually, you can make it up. With no end in sight to this migration age of anxiety, Berliners are tired and paranoid and ready to believe stories of a rape victim who wasn’t raped and a dead asylum seeker who never lived.

The case of Lisa, a 13-year-old from Berlin’s Russian-German community, had been building from January 11th when her parents reported their daughter missing. When Lisa turned up a day later, the parents filed a criminal complaint, alleging three “foreign” men had abducted her from a Berlin railway station and taken her to a flat where they raped and beat her.

Matters gathered steam online until 700 furious people – a mix of Russian immigrants and neo-Nazis – gathered before the snowy chancellery chanting “Merkel must go!”. Many waved hand-made signs – all in the same handwriting – with slogans such as: “Today my child, tomorrow yours”.

Russian state media picked up the case and, with an eye on its audience in Germany, suggested Lisa’s ordeal was being suppressed by German police and press. In a similar vein, Russia’s foreign minister Sergei Lavrov said on Tuesday he hoped Germany’s migration problems “would not lead, for domestic political reasons, for the reality to be painted over with political correctness”.

That struck a nerve in Germany, a month after police and media were accused of playing down New Year’s Eve attacks on women in Cologne because asylum seekers were among the perpetrators. But Lavrov’s remarks prompted a swift response, with a spokesman for chancellor Angela Merkel saying it was “just not on to instrumentalise” the case.

Berlin’s foreign ministry went further, accusing Russia of ill-disguised political propaganda to distract from its own domestic problems. Police say the facts of the Lisa case are as follows: the 13-year-old exists but a medical examination found no evidence of rape.

After questioning her, they say the girl told them she had “fallen in with the wrong crowd” and had had consensual intercourse with two men – one a Turkish national, the other Turkish-German – who are now being investigated for illegal sex with a minor. Crucially, police say, this all happened before she disappeared. Lisa was not abducted: a 19-year-old acquintance and that person’s mother say she was with them. And no asylum seekers were involved in the case.

Four days after the solidarity demonstration for Lisa before the chancellery, a similar drama played out two kilometres to the north at Berlin’s central asylum administration complex. On Wednesday morning, people lit candles and laid them before a sign saying “We are weeping.”

They were weeping because, hours earlier, a volunteer posted a startling message on Facebook. “Just now a 24-year-old Syrian who waited in the slush in sub-zero temperatures – [is] DEAD after a fever, shivering, and cardiac arrest in the ambulance,” posted the volunteer.

The news spread quickly through German news outlets and, on the radio, volunteer organiser Diana Henniges said she had no doubt about the claim by Dirk Voltz, a trusted volunteer who had taken asylum seekers into his home.

Opposition politicians pounced on the case. After months of chaos at Berlin’s asylum registration facility – in particular long, all-night queues, they demanded the resignation of the responsible minister. By Wednesday evening, however, following a day of increasingly doubtful headlines, police confirmed that the story was a hoax.

On Thursday Voltz said he had no memory of his post, and that he was exhausted and had been drinking the night before. For Berlin psychologist Isabella Heuser, it’s a phenomenon common among crisis volunteers. “It usually involves over-motivated people who either burn out or make things up,” she told the Bild daily.

Local Berlin volunteers, who have worked for months to fill the gaps in Berlin’s asylum care, admitted they had “cocked up”. “Everyone here believed this story because it is not unlikely,” said Henniges, the chief volunteer. “Everyone one of us, deep down, can imagine something like this could happen.”

Similar logic could be heard at the demonstration before Berlin’s chancellery, even as the story of Lisa’s rape was collapsing under the weight of the facts. A man claiming to be an uncle told the crowd that “Lisa’s fate is, sadly, not an isolated case”.

An older woman told German television: “Whether it’s true or not, I believe the story.” What both tales have in common is the element of “truthiness”: a readiness to believe something that is likely over something that is true. Put truthiness into the social media spin cycle and you end up with the phenomenon of “fact resistance”.

Sweden’s Language Academy chose it as one of their terms of 2015 and defined fact resistant people as those who “do not let themselves be influenced by facts that speak against their own views”. But after two hoaxes in a week Berlin’s interior minister Frank Henkel has sounded the alarm, urging people – and the media – to slow down. “If the public climate continues to be stoked up like this,” he said, ”we will have a serious problem: authorities, media and society.”

US presidential debate in quotes: ‘It’s hard to get any words in with this clown’ 08:23
Ebola aid workers from WHO and NGOs accused of sexual abuse in Congo 07:19
Coronavirus: New York City to impose fines for refusal to wear face covering 07:01
US election: Joe Biden and Donald Trump clash in chaotic presidential debate 04:45
UK’s Internal Market Bill passes all stages as backbench rebellion collapses 21:50