In a country where free press has been permitted only since 1991, there is a lack of skilled journalists – an issue now being tackled by many interesting media projects 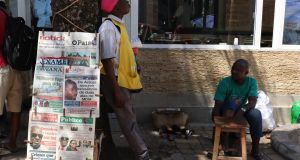 In the south of Maputo, off a loud street bulging with taxis displaying shattered windscreens and seat belts that don’t work, there is a quiet space. Here, the noise from outside barely penetrates.

In fact, for many who work here, it is entirely silent.

At its helm as managing director is Sousa Camanguira, in an odd position for a man who never wanted to be a journalist. After decades spent watching his family laugh at TV programmes he could not hear, he says he was compelled to start a channel where deaf people could be informed, educated and included.

“But it was not an easy journey,” he explains, speaking through two translators – from sign language to Portuguese to English. The journey to bring TV Surdo to life took the better part of a decade. “I worked as a volunteer for eight years trying to get support and people to fund me.” Back then, even his family doubted his mission.

He finally found success in 2015 with help from International Research & Exchanges Board (Irex), which runs a media strengthening programme in the country funded by US Aid. Now, as well as being online, TV Surdo also goes out weekly as the 20th most viewed programme on STV, the country’s largest independent television station.

Most impressively, the channel has now trained 15 staff members – all of whom began with no computer skills and can now produce the weekly programme. Of those, eight are deaf, one is blind and one is a wheelchair user.

“The remarks people make about TV Surdo are very positive and exciting,” Camanguira says. “My family are now very proud.”

Aside from the notable hurdles and successes of TV Surdo, training journalists in Mozambique in general has its own set of challenges. Mozambique held its first multi-party elections only in 1994 – two years after the end of a brutal 16-year civil war between the ruling party Frelimo and, what is now their political opposition, Renamo. In two decades, the country has transformed from a Portuguese colony, to a one-party state, to a democracy, and there are evident teething problems, both in politics and the media.

Additionally, free and independent press has been permitted only since 1991, so there is a distinct lack of seasoned reporters in the country – a major obstacle to teaching the next generation of journalists.

As a result, courses often have to bring in foreign reporters, from countries such as Brazil where Portuguese is a common language. Yet many aren’t versed in the nuances of practising journalism in Mozambique, with its idiosyncratic pressures and concerns.

Next door to TV Surdo, another Irex project, Media Lab, aims to prepare young journalists for some of these challenges. Here, and in the northern city of Nampula, trainees from across the country prepare to work in the country’s print, TV and online news industries, with a strong emphasis on multimedia.

Such an emphasis makes sense. Chief of party for Irex’s Media Strengthening Programme in Mozambique, Arild Drivdal, notes that in recent years media has begun to leapfrog the use of computers straight to the smartphone. These days, it’s not uncommon for news to first appear on Facebook or Whatsapp before reaching TV or radio.

That leap is great news for an urban population with smartphones and internet access, but it’s an advancement that risks leaving rural communities behind. According to the UN’s International Telecommunication Union, just 17.5 per cent of people in Mozambique had access to the internet in 2017.

Rural communities also struggle to keep skilled journalists. The pull from city jobs is strong; they offer more stability and more money. The result is that communities must engage in a conveyor belt of training to offset the brain-drain into the capital.

Female journalists drain out even faster, but not to cities; rather, they are pulled home due to a variety of social and economic factors. Media Lab aims to train 60 per cent women to compensate for future fall off and to maintain a long-term gender balance within an already male-heavy industry.

Drivdal offers explanations for the imbalance: “A male environment is not always so welcoming for women. Then you have work where you end up with late working hours, it’s very bad for young mothers or even wives. Husbands don’t necessarily appreciate wives coming home at midnight.”

However, the government has taken significant steps to encourage more widespread involvement of women in journalism. Maria Beatriz Pinto was brought into the state-funded station Radio Mozambique two decades ago alongside 30 other women – changing dynamics and priorities within the station to make it more inclusive of women’s issues.

The country is a tangle of dozens of languages, and you don’t have to go very far from the cities for people to speak only their local dialects

Speaking through a translator, she says the environment is vastly different now to when she began. “They used to give the women silly stories like going to the market to ask the price of things.” Now, she says, that rarely happens.

But she believes there are still issues rooted in how women view themselves in the workplace. She says it is up to women to question why they get less important issues to cover, and to fight for better quality stories.

Pinto has been at the forefront of a mission to represent women’s stories. Her journalism career began as part of a three-year programme from Radio Mozambique called Women and Development, created to push coverage of women’s issues by women in local languages. Her role was to set up the project and train female journalists in rural areas around the country.

But such training is not without issues: the country is a tangle of dozens of languages, and you don’t have to go very far from the cities for people to speak only their local dialects.

For those areas the importance of local radio cannot be overstated. The National Forum of Community Radio is at the forefront of efforts to co-ordinate and defend independent community radio. Its director of programmes, Ernesto Saul, says that by focusing on local issues, community radio plays an important role in ensuring people in rural areas have an identity and feel represented within their district.

Speaking through a translator, he notes that this benefit is especially seen during election time, when stations can help inform citizens of their rights and the power they hold in their own communities.

A former radio co-ordinator in Manica, John Chekwa, explains that in rural areas there are “a lot of crimes, a lot of grievances, a lot of problems”. Concerns are often as essential as access to water, hospitals, and roads safe enough to drive on.

“That is where a journalist might get an opportunity to give others a voice,” he says.

And despite the call of the big city, for some the importance of that local voice is being noticed. In Media Lab in Maputo one young trainee says he is training to be a journalist to make a difference.

“First to my community, then to my province, and then to the entire country.”