Frustration and anger expected to be vented in European elections 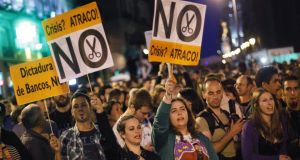 The economic crisis, which has seen Spain suffer two recessions and brought it to the brink of requesting a full sovereign bailout, has dented the country’s pro-Europe sentiment. Photograph: AP Photo/Andres Kudacki

As one of the EU’s most enthusiastic members over the last quarter century, Spain should have plenty at stake going into the European elections. But this year, at least, the vote will tell us very little about Spaniards’ relationship with Europe and a lot about the frustration and anger they feel regarding their own political parties.

Spain joined the EU in 1986, confirmation of its political maturity after leaving behind four decades of dictatorship and embracing democracy. The country’s express-speed growth and development over the following years were funded in great part by European subsidies, fuelling the country’s surging pro-Europe sentiment.

More suspicious
But the recent economic crisis, which has seen Spain suffer two recessions and brought it to the brink of requesting a full sovereign bailout, changed that. Today, Spaniards are more suspicious about the European project, as well as northern neighbours, such as Germany, whom they blame for dictating strict austerity measures to their government.

Prime minister Mariano Rajoy’s Popular Party (PP) has been on a constant slide in the polls since taking office more than two years ago, and an unemployment rate that is still over 25 per cent reflects how the government has struggled to turn around the economy.

And yet, the conservative PP is confident of winning the May 25th vote, beating its traditional Socialist rivals, who have suffered a similar poll slump.

The Socialists, in particular, are fighting to convince voters that there are clear differences of ideology and policy between them and the PP.

“In these elections, two different worlds and social models are facing off,” said Socialist leader Alfredo Pérez Rubalcaba on Saturday, presenting his own party as committed to protecting public health, education and pensions and the PP as rights-cutting puppets of Brussels.

Yet the Socialists have their own austerity-related baggage, having started the trend of cutting social spending in 2010 when still in government.

Julio Anguita, a veteran of the United Left (IU) communist-led coalition, described the two main parties as “two sides of the same coin, which goes into circulation whenever there are elections”.

In recent months corruption has become Spaniards’ second-biggest concern ––after unemployment – and both main parties are facing a catalogue of investigations related to their politicians’ misconduct.

Centrists
The IU is expected to be one of the beneficiaries of this trend, having seen its polls soar since the economic crisis started to bite. Another strong performer is likely to be Unión Progreso y Democracia (UPyD), a relatively new centrist party led by a former Socialist politician Rosa Díez, which has focused on voter worries about the rise of regional nationalism and overall disenchantment with the PP and Socialists.

“Spaniards are still furious with their two big national parties and although they have been flirting with two other parties, it does not look likely that this will translate into a substantial redrawing of the electoral map,” he noted, forecasting an extremely low turnout on May 25th.

And yet, in the north-eastern region of Catalonia, where nationalists are planning a referendum in November on independence from Spain despite opposition from the central government, the EU elections could have substantial repercussions.

A very strong showing by radical pro-independence parties could further harden determination to break away and make the idea of a separate Catalan state look even more possible than it does now.