As Greek-EU talks resume, who will be first to make bailout concessions?

Tsipras is optimistic a deal can be reached, but few in Europe agree 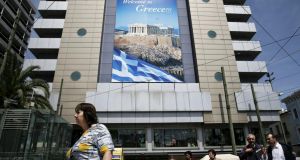 Billboard in central Athens: Greece aims for a deal with creditors, but will not back down on red-line issues. photograph: reuters/alkis konstantinidis Photograph: Reuters/Alkis Konstantinidis

As the Greek Easter holiday period – Easter Sunday fell a week later than in the West this year – comes to a definitive end with the reopening of schools today, Greeks lucky enough to escape on a break will be bracing themselves for a return to the daily media feed of doom and gloom.

On Saturday, technical talks between Greece and its lenders resumed in Paris with the goal of compiling a list of economic overhauls that could unlock billions in bailout funding the government in Athens badly needs to meet looming loan repayments in May and beyond, and avert default.

While prime minister Alexis Tsipras insisted last week he was “firmly optimistic” a deal was on the horizon, few in Europe are confident that anything near an agreement will be reached by this week’s meeting of euro zone finance ministers.

Last Friday, eurogroup chief Jeroen Dijsselbloem expressed his hope that the talks would produce “a more final outcome” by the next eurogroup session of finance ministers, which takes place on May 11th.

Deep differences remain between both sides, particularly in the thorny areas of social insurance, pensions and labour law, and over the Greek government’s determination to gradually restore the minimum monthly wage to its pre-austerity level of €751.

“They are trying to push us into fiscal assessment, where we go back to a discussion of budget deficits, balance sheets and primary surpluses. They want agreement on those before discussing the measures to achieve them. What we want to do is first discuss certain measures, which may or may not reach certain targets, but that at least will help get the economy going again,” the person said, speaking on condition of anonymity.

Since coming to power in January, Tsipras’s left-led coalition has been under intense pressure to come to a deal with its creditors. That pressure is evident in the economy, which is being strangled as result of the impasse.

The country hasn’t received a cent of bailout money since last August and the election period saw about 15 per cent of total deposits leave the banks, although withdrawals have eased since then. On top of that, since February, the European Central Bank has kept Greek banks reliant on emergency funding, which is more costly than normal central bank refinancing methods.

Tsipras’s government has only managed to meet its payment deadlines by dipping into central bank profits and the cash reserves of state agencies. The IMF received almost €2 billion in the past two months. But with each payment hurdle cleared, another one lies ahead and the cacophony of default diviners gets louder.

Nevertheless, both sides seem determined to hold their ground. The mood in the government is that it is not in a position to retreat on what it sees as its red lines.

“Athens has made all the concessions it could and has said it will not proceed with any unilateral actions,” the government insider said, pointing to the government’s “60-70 per cent acceptance rate”. Recent opinion polls suggest that support for Tsipras’s Syriza party has increased since the election.

But that support is not monolithic, given that the government enjoys support from different people for different reasons. Among them are the original 4 per cent core that made up Syriza before the crisis, the millions who flocked to it yearning for hope and out of disillusionment with the established conservative and socialist parties, as well as the supporters of right-wing Independent Greeks party, Syriza’s junior government partner.

Internally, Tsipras also faces the problem of reconciling the different strands within his party around policies that touch on core issues such as privatisation, immigration and policing.

An example of those tensions was the rumbling among sections of Syriza’s core base against a minister’s decision last week to authorise riot police to end a 19-day sit-in at Athens University staged by anti-authoritarian groups in support of a hunger strike by jailed anarchists.

For some within Syriza, the police action violated university asylum, which the party has vociferously defended in the past.

But these internal differences are often overplayed, particularly abroad, to suggest Tsipras will have to ditch his party’s left wing and forge a new alliance with the moderate parties of the centre if he wants to continue as prime minister.

On the ground in Athens, there is little indication that he is even prepared to contemplate that. The feeling is that Tsipras, and his finance minister Yanis Varoufakis, are simply too charismatic within the party for anyone to mount a serious internal challenge.

Tsipras may well heed the advice of Paul Krugman, whom he received over the weekend in Athens after the Nobel Prize-winning economist spoke to a capacity audience in the city’s concert hall.

Urging Athens to avoid a euro exit, which he said would be a “nightmarish” move for Greece while also creating a major problem for the euro system, Krugman suggested that Greece should accept a “halfway reasonable compromise” to allow it to achieve a smaller primary surplus.

But he warned that some of lenders’ demands for structural reforms were “just demands for more austerity”.