Annexation of Crimea is the act of a bullying power

Opinion: When should minorities have a right to secede? 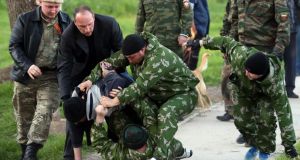 There was an unofficial referendum this week in a major European country, and a vote for secession by a region with its own distinct culture, language and economy. No, not Crimea. But Venice it is, or more precisely the five million-strong Veneto region, which wants to go it alone.

Veneto is particularly aggrieved at the fact that its taxes are being used to subsidise the feckless, corrupt south of Italy, and like the broader movement that spawned the nationalist Liga Nord party – which wants to establish northern Italy as a new state called Padania – sees its case as a simple expression of a “democratic” will, self-determination. Much akin, indeed, to Crimea’s, although it is most unlikely its neighbour Austria’s tanks will roll in to help. Even less likely would be Rome’s agreement, any more than France, say, would accept a similar vote in Corsica.

Establishing what a “democratic” will is is deeply problematic. Draw the boundaries carefully around many national minorities and allow them to express themselves in a vote on independence, and it is probably true to say there is not a state in Europe that could not spin off at least a couple of micro states . . . but would such votes be real expressions of “democratic” wills, or simply of manufactured majorities?

Should minorities have “rights” to secession, or should such rights be at least partly circumscribed by the rights of the majority in the bigger polity of which they are part to consent to such tests of public opinion? To consent to being dismembered? The UK’s consent to a Scottish referendum is crucial to the democratic legitimacy of any decision the Scots take. A self-initiated and organised Catalan poll, however, could not be said to carry the same democratic weight.

There is an easy temptation for those who would never say a good word about Obama/Cameron/Merkel/Nato/the EU (delete as appropriate), to see the Crimea simply as a case of the people expressing their democratic will. With the benign fraternal assistance of Mother Russia/the Soviet Union (delete as appropriate).


Scenario
In constructing this scenario it is appropriate, for the purposes of any credibility, then to say a few harsh words about Vladimir Putin: Scoundrel – yes. Bully – yes. Democrat – no. Champion of human rights – definitely not. Corrupt oligarch, capitalist – yes (his personal fortune has been estimated at $40 billion making him Russia’s – and Europe’s - richest man). Russian chauvinist – yes. And definitely in the tradition of Stalinist “tankies” – a traditional Trotskyist insulting reference to the old communist parties’ preferred mode of argument. Yes, yes.

As he made clear in his speech this week, Putin also regards all of Ukraine, not just Crimea, as within Russia’s legitimate grasp: “Our concerns are understandable because we are not simply close neighbours but, as I have said many times already, we are one people. Kiev is the mother of Russian cities. Ancient Rus is our common source and we cannot live without each other.”

And as we remember from Hungary and Czechoslovakia in ’56 and ’68, there’s always a local stooge ready to do Russia’s dirty work legitimising intervention: “The residents of Crimea and Sevastopol turned to Russia for help in defending their rights and lives . . . Naturally, we could not leave this plea unheeded.” Naturally

But what matters in assessing the rights and wrongs of his actions, according to this logic, are not his methods or mendacity, nor indeed his motives, although we would be expected to hold all such sins as definitive arguments against Obama and his ilk over their actions.

The only thing that matters with Putin, apparently, is the simple fact that he is assisting in the expression of the democratic will of the Crimean people, and by logical extension potentially those of eastern Ukraine. So far, thankfully, they have been spared his assistance. But he’s on the side of the angels. “Putin and Russia are right”, a fellow columnist put it in these pages on Thursday.


Referendum
But it’s not that easy. Consider the following theoretical scenario: Northern Ireland 2020, and an officially sanctioned referendum produces a majority for a united Ireland. But there are four counties with clear majorities to remain in the union. The British government decides to “respect their democratic rights” and brings in tanks to make sure no one forces the four out . . . President Putin, now in his fifth term, applauds from the sidelines the UK’s defence of “democracy” and the alleged threats to fellow British citizens’ lives and values: “I told you so!” Mutatis mutandis .

The annexation of Crimea is not a democratic act, but that of a bullying power hankering after the glory days of empire. The EU is right to see it as such and attempt to curtail Putin’s further ambitions.
psmyth@irishtimes.com