About 400 migrants dead after boat capsizes in Mediterranean 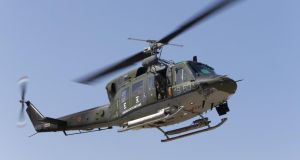 An Italian military helicopter helping with sea rescue operations in the Mediterranean. About 400 migrants died after their boat capsized on its way from Libya to Italy in the latest tragedy in the region. File photograph: Darrin Zammit Lupi/Reuters

About 400 migrants died in an attempt to reach Italy from Libya when their boat capsized, survivors of the accident said.

The accident was the latest tragedy in the Mediterranean, where the death toll from shipwrecks has surged this year.

The boat, carrying about 550 migrants in total, flipped about 24 hours after leaving the Libyan coast, according to some of the 150 survivors who were rescued and brought to a southern Italian port this morning, Save the Children reported.

Before this incident there had already been more than 500 migrant deaths while crossing the Mediterranean from Africa this year, a distinct increase from 47 in the same period of 2014, the Geneva-based International Organisation for Migration (IOM) said.

The survivors of the latest shipwreck were mostly sub-Saharan Africans, but no further details were available, a Save the Children spokesman told reporters. It was not clear exactly when the boat had capsized.

The number of boats carrying migrants aiming to reach the EU from Africa has increased in recent weeks as spring weather makes the passage safer.

In February, more than 300 migrants drowned when attempting the crossing in cold weather and rough seas.

Save the Children, the IOM and other humanitarian organisations have called for the European Union to bolster its sea rescue operations before the migrant flows increase in the summer months.

On Monday, 2,851 migrants were saved in rescue operations in the Mediterranean, the Italian coastguard said, adding to the nine who died and 5,629 who were saved over the weekend.

Italy, which handles the largest number of migrant arrivals in the EU, has become increasingly alarmed about the breakdown of law and order in Libya, which has greatly exacerbated the task of addressing migrant flows.

Separately, the EU border control agency Frontex said that migrant traffickers had fired shots to prevent their wooden boat being confiscated after rescuers saved the 250 people it was carrying off the coast of Libya.

After the migrants had been rescued, a speedboat approached and its crew fired several shots into the air before the assailants sped away with the empty migrant boat, Frontex said.

Frontex said the episode marked the second time this year that armed smugglers had taken back a vessel used to transport migrants following a rescue in the central Mediterranean.