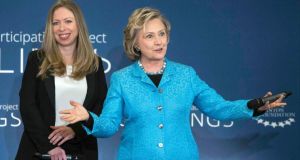 Chelsea Clinton announced her pregnancy at an event with her mother former US secretary of state Hillary Clinton. Photograph: Andrew Kelly/Reuters

Chelsea Clinton has said that she and her husband, Marc Mezvinsky, are expecting their first child this autumn, giving Hillary Rodham Clinton an additional line in her biography as she contemplates another run for the presidency: grandmother.

“One more thing to say very quickly,” Chelsea Clinton said as an event on the Lower East Side of Manhattan was coming to a close yesterday . “Marc and I are very excited that we have our first child arriving later this year.”

With her mother at her side, Clinton added, “I just hope that I will be as good a mom to my child and, hopefully, children as my mom was to me.”

Mr Mezvinsky watched the event - held to discuss efforts by the Bill, Hillary and Chelsea Clinton Foundation’s efforts to advance women and girls - from the back of the room with Bari Lurie, Chelsea Clinton’s chief of staff, whom she has known since living in the White House.

Ms Clinton, who married Mr Mezvinsky in 2010, made the announcement on her own terms, and many of her mother’s closest aides were unaware of how she planned to break the news.

Since leaving her job as secretary of state, Hillary Clinton has made women’s and girls’ issues central to her work.

Rooting the family announcement in that philanthropy, Hillary Clinton said, “We’re very excited about what’s happening in our family, but we’re also very excited because of what we’re doing that we hope gives confidence and support to so many of you across our country.”

To that sentiment, her daughter added, “I certainly feel all the better whether it’s a girl or a boy that they’ll grow up in a world with so many strong female leaders.”

The news will probably bring a wave of warm attention as Ms Clinton contemplates whether she will run for president again in 2016, and it could serve as a counterweight to criticism from political rivals.

The coming year is expected to be an awkward one for Ms Clinton as independent groups spring up around her to support her candidacy, though she remains mum on her plans. People close to Ms Clinton have for months said a grandchild would be a welcome distraction. Last autumn, her daughter told Glamour magazine 2014 would be the “year of the baby.”

Former US president Bill Clinton and Hillary Clinton have said for years that they would like to be grandparents, putting unabashed pressure on Chelsea, their only child. “Excited to add a new line to my Twitter bio... grandfather-to-be!” Bill Clinton said in a Twitter message after his daughter’s announcement.

In addition to impending motherhood, Cheslea Clinton (34) has taken on a larger role in the running of her family’s foundation. She recently helped install Eric Braverman, a friend and former McKinsey and Co colleague, as chief executive, replacing Bruce Lindsey, a longtime Clinton confidant, who remains chairman of the foundation’s board. She also remains a special correspondent for NBC News and a fixture on the New York City social circuit.

After the event at the Lower Eastside Girls Club, Chelsea Clinton and her mother discussed the announcement with Anna Wintour, the editor of Vogue and a Democratic fundraiser, and other supporters in attendance.

Ms Clinton then rushed to the premiere of “Of Many,” a short documentary about Jewish-Muslim relations that she produced. At a reception overlooking the High Line after the premiere, Chelsea Clinton - who offered a few remarks - and Hillary Clinton mingled with supporters.

“It’s so exciting,” a beaming Hillary Clinton said. In September, CBS News asked Bill Clinton whether his wife would rather be president or grandmother. “I think she’d say grandmother,” he replied.

Then, Bill Clinton, who has often talked about his own mortality since a quadruple bypass in 2004, added: “My goal is to live to be a grandfather. The rest of it is out of my hands.”